This widespread, synanthropic species is quite variable in color, head sculpture and mesosomal structure.

Native range from Argentina to Nicaragua, plus the Caribbean. It has also become established in Florida and Hawaii. In Florida it is known from a few collections in Dade and Broward counties. Nests were in saw grass stems at the edge of marshy areas. Pest status: none. No previous published records; earlier specimens: 1993. (Deyrup, Davis & Cover, 2000.)

Camponotus sexguttatus is common in disturbed and edge habitats throughout the neotropics.

Schmid et al. (2014) found this ant nesting in infructescences (the stem and remains of buds and fruits above the level of the water reservoir in the rosette) of the bromeliad Vriesea friburgensis on Santa Catarina Island, Brazil.

DaRocha et al. (2015) studied the diversity of ants found in bromeliads of a single large tree of Erythrina, a common cocoa shade tree, at an agricultural research center in Ilhéus, Brazil. Forty-seven species of ants were found in 36 of 52 the bromeliads examined. Bromeliads with suspended soil and those that were larger had higher ant diversity. C. sexguttatus was found in 2 different bromeliads but was associated with twigs and bark cavities, rather than suspended soil or litter, of the plants.

Camponotus sexguttatus has been collected a number of times in Florida but is apparently a recent arrival. The earliest collection records are from 1993. Nests were found in saw grass stems at the edge of marshy areas (Deyrup et al. 2000). A nest was also discovered in an exotic acacia species in Walt Disney World's Animal Kingdom (Wetterer and Wetterer 2003).

Wheeler (1908) reported the following about this species: 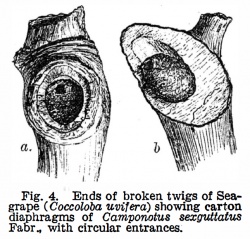 The female specimen on which Fabricius based this beautiful species, came from Santa, Cruz, one of the Virgin Islands. It has since been found to be widely distributed through tropical America. Forel has described its habits and figured its nest in Biologia Centro Amer. Hymen. III, 1899-1900, p. 155, PI. II, Fig. 6. " It lives either in hollow twigs of trees and bushes; in bark, or in nests of coarse, loose carton, which it builds around the stems of grasses in the savannahs by agglutinating the thread-like particles of grasses and other debris. These nests are very primitive and not very populous. They resemble the webs mixed with debris constructed by certain spiders. I observed these nests in Martinique, but never in Barbados, where the same species lives in hollow stems and under bark, never in carton."

In Culebra and Porto Rico I also failed to find any carton nests of C. sexguttatus but found it repeatedly in hollow twigs, especially of the sea-grape. It uses a small amount of carton, however, in constructing at end of the broken twig a diaphragm which has a round opening to serve as an entrance. Sometimes the diaphragm is flat, (Fig. 4a) in other cases produced as a cone (Fig. 4b) . At Coamo Springs a number of workers were seen on the flowers of Serjeania lucida.

Jack Longino - I know this species from relatively few collections. They have all been from very weedy open areas. The species seems to have small colonies in very ephemeral nest sites. At Sirena in Corcovado National Park I found workers while collecting at night in an old guava plantation. Another time I was collecting in an area of open Sida and grasses, and down in the leaf litter I found an aggregation of workers, some brood, and a queen. Several minor workers were dragging the queen to and fro. There was no nest structure. At La Selva Biological Station the species is only known from around the lab clearing and administration area. Ronald Vargas found a nest in a rolled Heliconia leaf. Alate queens have been taken at the lab clearing blacklight (3 March 1989).

Wild (2007) reports upon the status of this form in Paraguay and succinctly states some more general issues involving this ant's nomenclature and texonomony: Camponotus sexguttatus is a common ant throughout the neotropics, particularly in disturbed or edge habitats, that has accumulated an unfortunate number of infraspecific taxa. These names usually pertain to minor color differences. While C. sexguttatus in the broad sense may actually contain a number of cryptic species over the full range of the group, there is little chance that the current haphazard assortment of subspecies and varieties accurately represents them. Literature records from Paraguay include both C. sexguttatus (Forel 1906, Forel 1907b [as “bimaculatus”], Kempf 1972) and C.sexguttatus var. fusciceps (Emery 1906, Kempf 1972). Examination of the specimens at Musee d'Histoire Naturelle Genève on which the records are based shows both to belong to the single common species that I have been calling C. sexguttatus. A proper taxonomic study may eventually show that the forms from subtropical South America should have a different name, as the type of C. sexguttatus is Antillean in origin, far to the north.

The combination of being widespread and highly variable has led to the creation of many names for this form. Oddly enough there does not appear to be a clear and detailed description that unambiguously defines each caste of this species. The earliest descriptions were vague. Most varieties are noted by brief remarks about differences from the type and do not include more thorough descriptions.