LaPolla (2004) - A. fuhrmanni has been found in litter, and in a variety of habitats from grassy, open areas to rainforests. It has been recorded occurring up to an elevation of 950 m. Wheeler (1935) stated that this species was also found in cacao plantations. Queens are trophophoretic, having been recorded with at least one mealybug species belonging to the genus Neochavesia. Wheeler (1935) noted that workers and queens (he unfortunately did not indicate if the queens were alate or dealate however) carried mealybugs when a nest was disturbed. 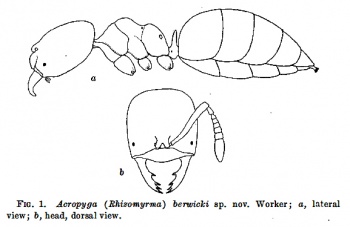 This species is fairly easy to recognize with its 8-segmented antennae and relatively large eyes, set close to head's anterior margin. Some specimens have been examined where the gaster is darker than the rest of the body giving them an almost bi-colored appearance. However, all other characters suggest these specimens are con specific with specimens that are yellow colored throughout. Additionally, size of the worker is variable with a series of specimens from Costa Rica being the largest (TL: 2.3-2.6), while most A. fuhrmanni are around 1.6 mm in total length. Unfortunately despite being one of the more common species in collections, only one male specimen is known, and it was in very poor condition. Therefore, as males are collected across the range of this species, they should be examined to address any questions of conspecificity. A. fuhrmanni is a member of the decedens species-group and is the sister species to the goeldii complex of species. Its penis valves are elongated as in Acropyga smithii, though they are not as wide.


From LaPolla (2004): This species has a wide range from Central America (recorded as far north as Costa Rica) south throughout tropical South America.

Jack Longino: This species inhabits wet forest habitats. It is most often encountered by looking under stones or by sifting leaf litter from the forest floor (Winkler samples). An alate queen was collected at La Selva Biological Station on 2 November 1994.

LaPolla (2004) - Unfortunately the single known male specimen was in such poor condition (shriveled) as to prevent description of the mesosoma; therefore only a description of the head, gaster and genitalia follows. Head: brownish-yellow, darker toward apex around 3 prominent ocelli; head longer than broad, oval in appearance; covered in a layer of appressed hairs; eyes large, breaking outline of head in full frontal view; eyes very close to anterior margin of head as in other castes; 9 segmented, incrassate antennae; apical segment about as long as proceeding 3 segments; scape reaches to posterior margin; clypeus narrow, with a few erect hairs; mandible with long apical tooth and a sharp basal angle not fully developed into a distinct tooth; gap exist between inner mandibular margin and anterior clypeal margin. Gaster: brownish-yellow; covered in layer of appressed hairs, with scattered erect hairs throughout. Genitalia: parameres in lateral view, long and rectangular, though tapering toward apex and covered in numerous erect hairs; in dorsal view, parameres with slight lateral expansions; cuspi tubular in shape, tapering toward apices which bear several short, peg-like teeth where they meet with digiti; digiti long, in dorsal view appearing almost as long as penis valves; tip of digiti slightly anvil-shaped, bearing short, peg-like teeth toward dorsal surface.