LaPolla (2004) - Collected in rainforest from leaf litter and soil cores. It has been reported as being trophophoretic and been associated with 3 mealybug species: Eumyrmococcus kusiacus, E. neoguineensis, Xenococcus acropygae (Williams, 1998).

Workers of this species can be difficult to distinguish from Acropyga pallida, especially if a specimen is on the lower end for head width measurements. Examination reveals morphometric differences between the two species. Typically A. ambigua head width is greater than 0.45 mm, while A. pallida is less than 0.45 mm, although exceptions occur. Smaller individuals of A. ambigua are difficult to distinguish because the mandible, which is distinct in larger individuals can become similar to the A. pallida mandible type, that is in lacking a distinct diastema associated with the basal tooth. Another problem arises in that A. pallida specimens can form diastemas between the 4th and basal tooth as a result of dental abrasion. When this occurs and the head width is below 0.45 mm the specimens are nearly impossible to separate between the two species, though plotting head width against head length can be helpful.

Males are not known for this species. 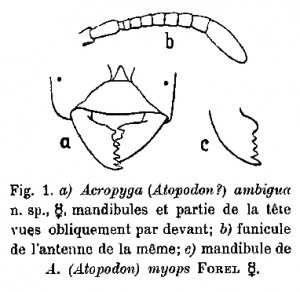