Lapolla (2004) - This species is known to tend the mealybug Eumyrmococcus scorpiodes (see De Lotto, 1977 for more details) and has trophophoretic queens (Prins, 1982). Alates have been collected from March to July. Prins (1982) discovered trophophoretic queens in July. A. arnoldi has been found in a variety of habitats throughout southern Africa from deserts to woodlands.

This species is easy to recognize from other Acropyga by its broad, many-toothed mandible (at least 6 teeth and up to 9) and by the 5 to 4 segmented maxillary palps. It is the only Acropyga known from southern Africa. The combination of high number of mandibular teeth and high number of maxillary palpal segments suggests that this species is primitive.

The other African species, Acropyga silvestrii has up to 7 teeth, but its palp formula is never greater than 3:3, and it is known to have antennal segment counts as low as 10 (possibly indicative of belonging to a more derived group). Acropyga paleartica has been observed with up to 8 mandibular teeth, and possesses a 5:3 palp formula. The relationship of A. arnoldi to A. paleartica and A. silvestrii is unclear since those two species await discovery of males. Interestingly, the mealybug utilized by A. paleartica (Eumyrmoccus corinthiacus) is thought to be closely related to the mealybug species utilized by A. arnoldi (Williams, 1998).


LaPolla (2004) - This species range is throughout southern Africa (roughly defined as the area south of the Zambezi River). The exact northern limit of A. arnoldi is unclear, however, it does not appear to overlap with the other described African species Acropyga silvestrii, which is known to extend at least into northern Tanzania. 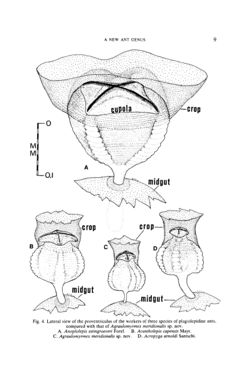 Acropyga (Malacomyrma) arnoldi Santschi, 1926: 245 (w.q.). 7 syntype workers, 1 syntype queen, SOUTH AFRICA: Durban (C.P. Merre) Museum of Comparative Zoology, Naturhistorisches Museum, Basel and SAMC [examined]. The designated lectotype is a worker labeled JSL TYPE # 112 and is deposited at SAMC. The lectotype is one of three specimens flat on a card and is the worker specimen furthest from the queen specimen. Prins 1982: 245, description of male.