Higher elevation coniferous forest species which occurs in moist habitats, in shaded grassy slopes with pines or grasslands. Temnothorax rugatulus can also be found in pinyon-juniper and cool desert habitats. Nests have been found in the soil, under rocks, in decaying wood, in grasses and in trees. Colonies may be monogynous, typically with a single macrogyne queen, or polygynous, with multiple microgyne queens. (Mackay 2000)

Mackay (2000) - A member of the Temnothorax longispinosus species complex. Workers of this species have an 11 segmented antenna, a coarsely rugose dorsal surface of the head, the dorsum (and sides to a lesser extent) of the mesosoma and petiole are rugose as the head, the propodeal spines are well developed, longer than the distance between their bases, the dorsum of the postpetiole has rough punctures. 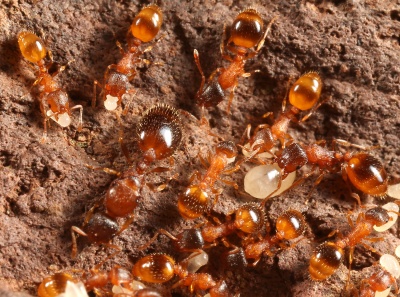 Nests often under rocks and in crevices on the underside of coarse rocks.

Cole (1934): This ant is rather frequent in moist habitats near Twin Falls, Hagerman and Buhl, chiefly along the Snake River. Colonies are small, the workers timid and sluggish and the brood scant. Winged forms appear at Twin Falls in late September.

Wheeler and Wheeler (1986): In Nevada Temnothorax rugatulus records are widely scattered, but absent from the southern quarter of the state. We have 30 records from 20 localities; 4,700-9,100 ft., mostly 6,000-7,000 ft. Fifteen records were from the Coniferous Forest Biome, 5 from the Pinyon-Juniper Biome, and 4 from the Cool Desert. Five nests were under stones, 8 were in rotten wood. This is a slow-moving ant.

Cole (1953, 1954): Colonies of Temnothorax rugatulus Emery were observed at an elevation of 6,350 ft. at Bandelier National Monument and 5 mi. E. of Taos, 7,350 ft. At both places nests were common beneath stones on shaded grassy slopes with pines. A number of the colonies was very populous and multiple queens were present.

An study of starvation resistance by Ruppel and Kirkman (2005) produced the following findings.

Most of a set of 21 laboratory colonies were able to survive eight months without any food. Brood decline began first (after two months) and mortality was highest, worker decline was intermediate, and queen mortality started latest and remained lowest. Brood (its relative change during the first four months and the level of brood relative to colony size) was the only significant predictor of colony starvation resistance.

Most colonies survived four months of total starvation without a significant decline. While it was found that the number of brood and workers was dramatically reduced after eight months, this time period exceeds the annual period of productive warm weather activity in most Temnothorax rugatulus habitats.

From this study they conclude that most well-fed colonies could survive a whole season without food. Internal resources and brood are suggested to be the only effective mediators of starvation resistance in this species. The amount of brood continued to increase during the first two months without food, with the brood then becoming a source of nutrients once internal reserves were depleted. Colony size was not shown to provide does not confer any survival advantage.

Moglich (1978) studying a population of Temnothorax rugatulus in a mixed oak-juniper forest in the Chiricahua Mountains found colonies had an average of 109 workers (range 30 to over 200).

Nests have been found in the soil, under and between rocks, in decaying wood, in grasses and in trees. Colonies will readily emigrate to new nest locations if a nest or micro-ecological conditions become unfavorable.

Moglich (1978) studying a population of Temnothorax rugatulus in a mixed oak-juniper forest in the Chiricahua Mountains described their nests, which were found under stones. Dry brown oak leaves, juniper needles, little twigs and a diversity of other plant materials formed the bases of the nest chambers, which showed flat, often unbroken surfaces. Thus the whole colony was exposed after the stone was turned. The ants were crowded together either on the top of the material or upside down on the stone ceiling. Sometimes, however, a few small chambers were built into the base of the nest. Although the space covered by the rock measured 219 x 292 cm2 (range 32-1 800 cm2) the nest chambers were considerably smaller (24 x 17 cm2; range 2.4-63 cm2). The walls confining the nest chambers were constructed out of fine material like soil and small vegetation particles. Mean nest density was 1.5 ± 0.9 per 9.3 m2).

There are two queen morphs in Leptothorax rugatulus. Microgynes, slightly larger than worker size, and macrogynes, which are roughly twice as large as workers. Genetic evidence shows that queens in polygynous colonies are related to each other, supporting the hypothesis that colonies with more than one queen commonly arise by the adoption of daughter queens into their natal colonies. The higher fat content of macrogynes, their predominance in monogynous societies and in small founding colonies, and their greater flight activity favor the view that macrogynes predominantly found colonies independently, while microgynes are specialized for dependent colony founding by readoption. Despite the potential for these two mating strategies to lead to the creation of distinctive genetic subpopulations, genetic diversity is likely maintained by queens mating randomly with males. (Rüppell et al. 1998, Rüppell et al. 2001, Rüppell et al. 2003)

There are two queen forms, a microgyne and a macrogyne. Queens and males have been collected but have yet to be described.

The original description lists specimens from Colorado and South Dakota. Creighton (1950) gives the type locality as Colorado "by present restriction. Mackay 2000 - American Museum of Natural History, Museo Civico di Storia Naturale, Genoa Unless otherwise noted the text for the remainder of this section is reported from the publication that includes the original description.

Morphology, in reference to the rugosity found on the body.