This species nests in the soil as well as under moss. The larvae spin cocoons (Okamoto, 1972). Not rare in some localities within Japan. (Japanese Ant Image Database)

Taylor (1967) - A Japanese species closely related to, and possibly cognate with, Ponera chapmani. Distinguished in general from other Ponera species by the combination of moderately large size (head width 0.61-0.64 mm in worker, 0.71-0.74 mm in queen), heavy sculpturing, and long scapes, which almost exactly reach the median occipital border. Readily differentiated from the only other known Japanese species, Ponera japonica, by its larger size (head width 0.42-0.50 in japonica) and heavier sculpturation. P. scabra may be differentiated from the related chapmani by characters stated below in the worker description.

The general biology of species in the genus was summarized by Taylor (1967): Ponera are small ants that nest in rotting logs in forested areas or under stones in nonforested situations. In the tropical areas specimens are rarely encountered away from rain forest. In temperate areas, however, species may occur in relatively lightly forested areas. This appears to be the case with Ponera japonica, Ponera pennsylvanica and especially with Ponera coarctata. The Australian Ponera leae is essentially limited to rain forest in the northern parts of its range, but further south it may be found in dry, lightly forested areas.

Foraging is probably cryptobiotic, though some New Guinea species have been taken straying on the ground surface. Little information is available concerning feeding. However, most species are probably insectivorous. I have conducted feeding experiments with some of the New Guinea and Samoan species, including Ponera xenagos, Ponera elegantula, Ponera tenuis, Ponera incerta and Ponera woodwardi. These were unsuccessful with the larger species, except elegantula, which accepted moderately large (8-12 mm) campodeid and japygid Diplura. Tenuis and incerta accepted smaller (4-6 mm) campodeids, isotomid and sminthurid Collembola, and small newly hatched spiders (2 mm long). Negative feeding response was obtained with eggs and larvae of various ants, small crushed insects of various orders, and small myriapods. Stray workers were never observed carrying prey, and distinct middens of insect or other remains were not located near nests.

Colonies usually contain about 30 workers. Larvae and pupae are not segregated in most cases, but occasionally aggregations of pupae were observed. These may have included the total brood of the colonies involved. Larvae are attached to the floor or walls of the nest galleries by the glutinous abdominal tubercles described above, and the ants move them high up on the walls or ceilings of artificial nests, if they are flooded. Details of nuptial behavior of pennsylvanica were given by Wheeler (1900), and Haskins & Enzmann (1938). The flights appear to be of a pattern typical for ants, with the alates meeting in the air and mating there or on the ground. Colony foundation is non-claustral and independent in pennsylvanica (Kannowski 1959); judging from my observations this is typical for the genus.

Leong et al. (2019): First of all, we found that a specimen (ANTC40459 collected from KiuShiu, Shiroyama, Japan) which was mistakenly pinned with the type label of Ponera scabra (see: Antweb.org 2017), deposited in Naturhistorisches Museum, Basel. Regarding the type locality of P. scabra Wheeler, 1928, the species was described based on specimens collected from Mt. Maya, Hyogo Prefecture, Japan. Therefore, the specimen (ANTC40459) does not belong to type series. Secondly, this specimen was reported by Santschi in 1937, who identified it as a gynecoid worker of P. scabra (see: Santschi, 1937: 364). However, this specimen is not P. scabra and can be easily identified as Ponera kohmoku Terayama, 1996 by the combination of the following characters: large compound eye (ca. 30 facets), distinct metanotal groove and subcircular petiolar node in dorsal view; in contrast to P. scabra, which present small compound eye (ca. 5 facets), an indistinct metanotal groove and an arched petiolar node in dorsal view. In summary, we assume that the other specimens of P. kohmoku workers were also misidentified as P. scabra gynecoid by Santschi (1937). Thus, no valid record of gynecoid worker exist in the Ponera genus after the exclusion of Santschi’s record (1937). 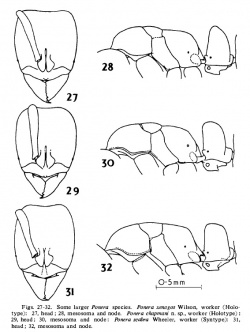 1. The 3 large apical mandibular teeth occupy about 1/3 of the masticatory border, and are followed by a series of 10-12 minute denticles.

2. Median clypeal denticle much less pronounced, at least in smaller specimens (see below).

3. Scapes relatively short; when laid back along head they almost exactly reach the median occipital border.

5. Mesometanotal suture much less distinctly incised, although indicated by a break insculpturation.

The posterior face of node with fine transverse superficial "scaly" sculpturation, like that on propodeal declivity of Ponera alpha, but more distinctly developed. This sculpturation, which probably represents a vestigial striate-rugosity, is more distinct on the lower 1 /2 of face than above.

Additional description. The following notes are based on 7 syntype workers and 2 dealated syntype queens from the MCZ and AMNH collections. An additional unstudied syntype worker is in the USNM collection (M. R. Smith, in litt). Wheeler presumably returned some of his types to Silvestri and it is not known whether he designated a holotype. Accordingly, no lectotype selection has been made here.

dealate Length 4 mm. Very similar to the worker. Head with even less convex sides and the petiole not so thick and with more concave posterior surface.

Differing from the workers in the usual characters, and from other Ponera queens by the characters of the diagnosis above. The palpal formula has not been checked.

Taylor (1967) - The records of Ponera scabra published in the important ecological studies of Hokkaido ants by Hayashida (1957, 1960) were in fact based on incorrectly determined specimens of Ponera japonica, which were generously made available for this study by Dr Hayashida. For further information see japonica.