A common West African species common in forests and forest edge. P. laboriosa builds its nests on the underside of leaves. Both its abundance and workers with golden-coloured gaster, has meant this species has garnered attention from numerous myrmecologists.

A member of the Polyrhachis militaris species-group. Bolton (1973) - A member of the militaris-group, laboriosa is easily separated from all other species by the unique form of the petiole.

P. laboriosa lives in pioneer trees and shrubs on forest edges in West Africa (Lenoir & Dejean 1994). Nests are built at a height of 2-3m in the canopy of small trees, using living leaves and plant debris. There is great diversity in the architecture of these nests, showing high opportunism by the ants. Leaves are incorporated in the nests, and provide structural strength for the carton. P. laboriosa belongs to the subgenus Myrma, in which there is no weaving using larval silk. The use of spider silk for nest construction has been described for P. laboriosa (Collart 1932). J.-L. Mercier (unpublished) observed a worker collecting silk from a spider web on a leaf surface. The ant pulled on the silk strands one by one, and rolled them into a ball using her gaster. During this time, the spider stood about 5cm away, and once attempted to chase the ant. At the end, the worker carried the silk to her nest that was being constructed by about 10 nestmates.

Founding queens have been observed retrieving various vegetal material which was used to build a small cell under a leaf (Lenoir & Dejean 1994). Two of 18 foundations involved two queens. 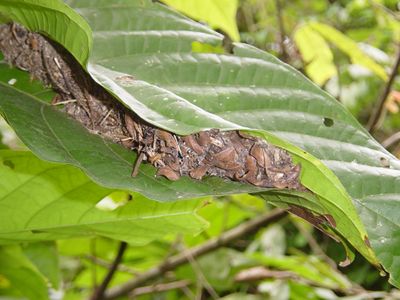 Nest of P. laboriosa made of a leaf bent and stitched together with vegetal debris and spider silk. Photo by Patrick Landmann.

61 nests censused near Yaoundé (Cameroon) yielded an average of 400 workers per nest (range 25-1919). Only 21% of nests had a dealated fertile queen, and such nests were more populous (881±505 workers, N=12) than queenless nests (277.5±263 workers, N=44) (J.-L. Mercier, unpublished). Five nests collected in Dja Reserve (Cameroon) contained 63-457 workers and up to 259 worker cocoons; a dealate queen was present in only one nest (K. Yéo & C. Peeters, unpublished). These data suggest that P. laboriosa colonies are polydomous (i.e. distributed into several nests) and monogynous (single queen). 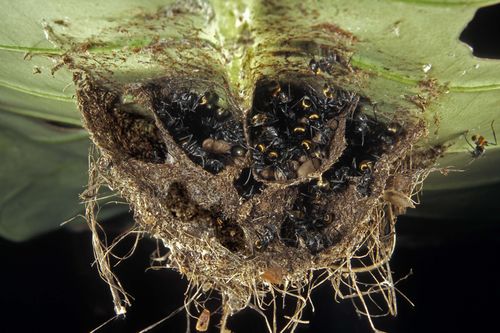 Bolton (1973) - The nests of this species, common in West Africa, are well known and consist of a mixture of vegetable fragments and small twigs bound together by silk and fungal hyphae, and adherent to the undersides of leaves or situated at the fork of small branches. Form and construction of the nest have been discussed many times, for example by Wheeler (1922a:259), Santschi (1909:393) and Collart (1932). P. laboriosa appears to be restricted to forested areas. When disturbed the workers curve the gaster under the alitrunk to eject formic acid, and also tap the gaster upon the substrate, making a rattling noise when performed by a number of workers together. If individual arboreal foragers are disturbed they tend to release their grip on the bark and fall into the undergrowth.

This species is a host for the fungus Ophiocordyceps unilaterialis (a pathogen) (Shrestha et al., 2017). 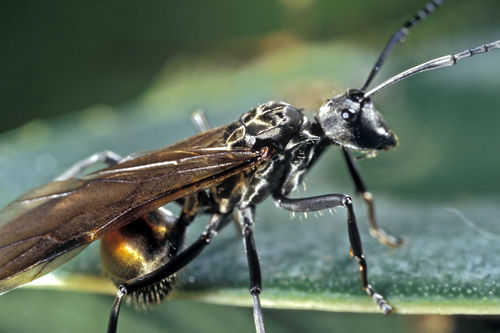 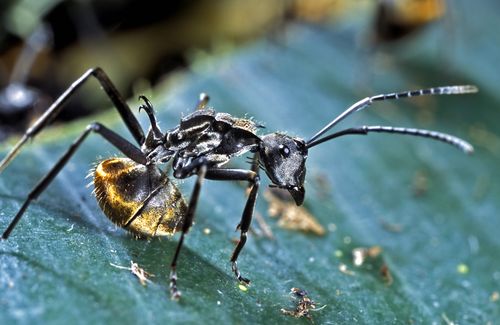 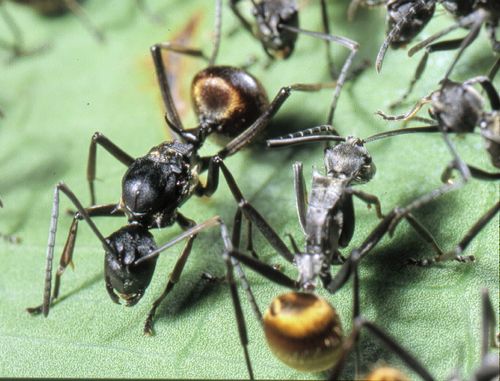 Anterior clypeal margin arcuate, entire, the clypeus with a distinct median, longitudinal carina. Eyes strongly convex, the sides of the head behind the eyes strongly convergent to a short convex occipital margin. Alitrunk marginate throughout its length, interrupted by impressions at the sutures. Pronotum and propodeum weakly concave transversely, the former armed with a pair of long acute, divergent spines, the latter with a pair of small teeth. Promesonotal suture distinct, metanotal groove impressed. In profile the propodeum rises abruptly from the metanotal groove, behind which it slopes convexly to the propodeal teeth. Petiole armed with a single pair of spines, set at the dorsolateral corners of the scale, weakly divergent, their apices strongly hooked, directed posteriorly and somewhat laterally.

All dorsal surfaces of head, alitrunk and gaster with numerous erect hairs, varying in colour from grey to golden-yellow. Pubescence dense, mostly hiding the sculpturation on the gaster, usually grey on the head and alitrunk, golden or bronzy on the gaster, but sometimes the pubescence of the pronotal dorsum is also yellow or golden.

Bolton (1973) - As worker, larger, with the marginations of the alitrunk less distinct. Pronotal spines and propodeal teeth reduced, the latter often to a pair of tubercles.