The parthenogenic ant Platythyrea punctata is of general interest biogeographically because it occupies a very large range that extends from south Texas to Costa Rica and from Florida to most islands in the West Indies and the Bahamas. It is not known to occur in South America or Trinidad and Tobago. Throughout its range it is found in relatively undisturbed, wooded areas and is probably a native species (Deyrup et al., 1988; Deyrup, 2000). A seeming contradiction to this wide distribution is that it would seem to be a very poor disperser. Winged queens have only been found in Florida, the Bahamas and the Dominican Republic (Wheeler, 1905; K. Kellner, unpublished data). Moreover, queens presumably do not fly, because they lack ocelli, possess poorly developed thoraces and wing muscles (Schilder et al., 1999a) and do not appear to be collected in malaise traps (Deyrup & Trager, 1986). Colonies are presumed to reproduce mainly by splitting or fragmenting (fission or budding) and the ants subsequently disperse by walking over land. (Seal et al. 2011)

This species is distinguished from all other North American ants by the following combination of features: the petiole is elongate-rectangular in both dorsal and lateral view; the body is covered with appressed pale pubescence that gives it a silvery appearance; the head and body are heavily punctate, but not striate. In the field it is a medium-sized (about 6 mm) charcoal-colored ant seen dashing over leaf litter, difficult to catch because of its speed and its tendency to hide under fallen leaves when pursued.

Widely distributed throughout the Caribbean islands, Florida, and Mesoamerica.

In Florida this species occurs from Brevard and Highlands counties south through the Florida Keys. It is probably restricted to frost-free areas or microhabitats. The general range of the species is from southern Florida and southern Texas (not known from intervening states) south into Brazil, including the West Indies (Smith 1979). There is no evidence that P. punctata is exotic in Florida, but it is a species that can live in disturbed areas, the nests are sometimes in dead wood, which makes importation somewhat easier, and unmated workers are able to produce female offspring parthenogenetically (Heinze and Holldobler 1995), so it would be easy to establish a population. On the other hand, it could have arrived by island-hopping through the West Indies. Heinze and Holldobler (1995) report that queens have poorly developed wings; if this were always the case, P. punctata would almost certainly have required assistance to establish an isolated population in Florida. Some Florida queens, however, have well-developed wings, and several winged queens have been collected in yellow bowl traps; these individuals might have walked up the sides of the bowls, but it is more likely that they flew. The origin of the Florida population is one of those questions that may be impossible to answer, unless it should turn out that the Florida population is most closely related to some distant population in South America. For the moment, this can be considered a native Florida species. 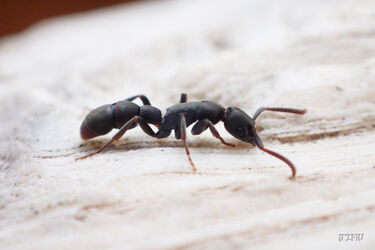 Brown (1957) reporting in a paper about collections by Robert L. Dressler from Chiapas, Mexico: "from a nest in a fallen log, August 3. Winged forms were present, the males being fully pigmented and apparently active, while most of the females were still in the callow stage or were not yet eclosed. Wilson found this ant foraging on tree trunks after dark in Veracruz and Cuba."

Deyrup, Davis & Cover (2000): This species occurs through the islands of the Caribbean and from Central America north to southern Texas (Brown 1975). The Florida population is currently isolated, though this species might have moved around the Gulf of Mexico to Florida when the climate was warmer. Nests, which often are in dry dead wood, could easily have been shipped to Florida in timber. Unmated workers are able to produce female offspring parthenogenetically (Heinze and Holldobler 1995), so it would be easy to establish a breeding population. Platythyrea punctata is well adapted to disturbed areas, at least in Florida and the Bahamas. The chance that this species was brought by man to south Florida is extremely good; the question is whether such immigrants would have found an indigenous population already established. The first published record that we know of (Creighton 1950) seems rather late for such a large, distinctive species, but these ants are wary and often dart away in the leaf litter before they can be caught.

In Florida nests are in dead logs and dead branches and logs. In Puerto Rico colonies are in rotten logs and stumps (Smith 1936) or in hollow rotting stems of the shrub Psychotria berteriana (Schilder et al. 1999). Workers forage singly (Smith 1936), bringing adult and larval insects back to the nest (Torres 1984).

Reproduction by this species is complex, as explained in studied by Heinze and Holldobler (1995) and Schilder et al. (1999). In many nests all individuals appear to be workers. Unmated workers can produce diploid (female) offspring (thelytokous parthenogenesis), as well as occasional males. Usually one female lays most of the eggs in each colony. Surprisingly, there are dominance hierarchies in these colonies, whose individuals must usually be very closely related, but the dominant female is not necessarily the one who lays most of the eggs. A small number of males are produced in some colonies. Queens and individuals intermediate between queens and workers also occur. All females have a spermatheca, although it may be poorly developed, and a small number of individuals of all forms have sperm stored in the spermatheca. There are a few other ant species whose virgin workers are known to produce females, but there are no other ants known to have explored reproductive options as thoroughly as P. punctata.

This ant can reproduce through thelytokous parthenogenesis: mothers can produce diploid, female offspring from unfertilized eggs. Kellner and Heinze (2011) found "that automixis with central fusion and a reduced recombination rate is the most likely mechanism of thelytoky, as in the Cape honeybee and the ant Cataglyphis cursor. Workers in many field colonies from the Caribbean Islands have identical multilocus genotypes and are thus probably clonal."

Reproductive strategy does vary across populations. Workers of from the Caribbean are fully capable of parthenogenesis and produce diploid female offspring from unfertilized eggs, and mated females and males are rare. In contrast, workers in one colony from Costa Rica were incapable of thelytoky; instead mated workers produced all female offspring while the northernmost population from Texas show sexual reproduction, and individuals were incapable of reproduction by thelytoky (Kellner et al., 2013).

Mann reported finding foragers "running about on the ground in shady places" (Haiti, Wheeler and Mann 1936). Solitary foragers have also been observed on forest trails in the Dominican Republic (Lubertazzi, personal observation). The number of individuals encountered across a wide area in a number of different locations suggests this species is quite abundant.

Length 3 1/4 lines. —Black: the antennae, mandibles, margins of the carinae between the antennae, the legs and apex of the abdomen, ferruginous; the head, thorax, node of the peduncle, and first segment of the abdomen with deep scattered punctures; the insect covered with grey pile; the metatborax truncate, the truncation slightly concave; the node of the peduncle incrassate, elevated to the same height as the first segment, elongated, and forming as it were a basal segment; the apical margin of the first segment ferruginous.

About the same size as the worker, which it greatly resembles, differing in the usual sexual distinctions of a smaller head, larger eyes; the ocelli very bright and glassy; the wings subhyaline, the nervures testaceous, the stigma fuscous.