In Deep Canyon, G. C. and J. N. Wheeler (1973e) found two nests of this distinctive species under palo verde (Cercidium floridum) trees, in nests ringed by craters of sand and with very large diameters. The workers are active at dusk but not during the day. They feed exclusively on insects, attacking larger prey in groups and spread-eagling their legs to render them helpless. The workers are also very efficient at forming gangs to transport large prey to the nests. Wheeler and Wheeler called them “ghost ants,” because in dim light the legs of foraging minors could not be seen, and the bodies appeared to float above the surface. The Wheelers also reported an instance of vistana workers invading a house at Deep Canyon. (Wilson 2003)

Southern California and adjacent northern Mexico. There is a single series in the Museum of Comparative Zoology from Tucson, Arizona. (Wilson 2003)

This species seems to be exclusively entomophagous. Prey is captured by the mandibles, since the sting is vestigial. In attacking a larger insect the workers grasp its appendages and pull backwards stretching the victim and pinning it to the ground. A sticky secretion from the tip of the gaster is smeared on the prey. Surprisingly large pieces of food are transported cooperatively and rapidly to the nest. Workers are most active in the evening and on cloudy days (Pullen, 1961).

In Deep Canyon (California) we (Wheeler and Wheeler, 1973) found only 2 nests of this species. Both were under palo verde (Cercidium floridum) trees; one had 2 craters 15 cm in diameter, and the other had 1 crater 30 cm in diameter. The entrance was very large-15-38 mm in diameter. We found the workers active at dusk, but not by day nor at 3:30 A.M. A colony attempted to invade our living quarters; hence P. vistana must be regarded as a potential household pest.

From Wilson (2003): Similar to Pheidole ariel, Pheidole desertorum, Pheidole portalensis, Pheidole sitiens and Pheidole skwarrae, differing from these and other members of the fallax group as follows.

Major: yellow; slender; with extremely long scapes, exceeding the occipital corners by a third their own length; all of head, mesosoma, and waist foveolate and opaque; all of first gastral tergite shagreened and opaque; rugoreticulum present just laterad to each antennal fossa.

Minor: yellow; slender; extremely long antennal scapes, exceeding the occipital border by more than half their own length; occiput narrow, with nuchal collar; all of head, mesosoma, and waist foveolate and opaque; all of central strip of first gastral tergite shagreened and opaque. 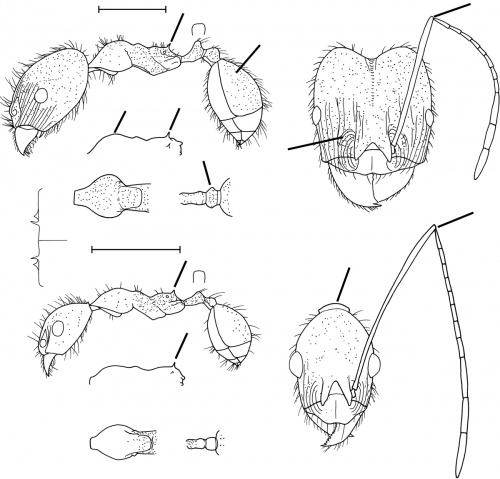