Known only from the type locality and a single Colombian accession (Zona Buenos Aires, 600–800 m, Charles Kugler). In the second series the specimens are larger and darker than the type and may represent a distinct species. (Wilson 2003)

A medium-sized, yellow member of the flavens group, similar to Pheidole camilla but differing in the major caste in the moderately convex profile of the head (not bulging as in camilla), exclusively carinulate (as opposed to partly rugulose and rugoreticulate) sculpturing of the dorsal head surface, and the vertical, forward-curving propodeal spine as viewed from the side. 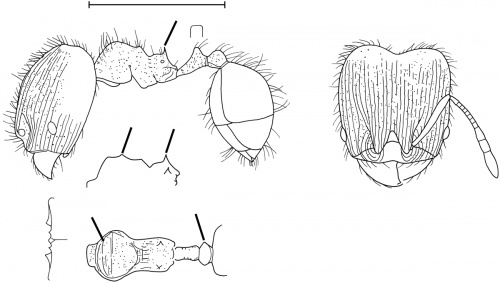 Named in honor of Anne-Eve Hazen, in recognition of her outstanding contribution in service and support to tropical conservation, hence the habitats in which the Pheidole ants will continue to exist.