Odontomachus rixosus inhabits plantations, secondary and primary forests in lowlands, and nests under leaf litter, in the soil near the base of living trees, and under rotten logs and stumps. It is a A widely distributed forest species. This species has been collected nesting together with Pheidole tandjongensis. Details concerning the nature of the relationship between O. rixosus and Pheidole spp. are unknown. (Satria et al. 2015, Sorger & Zettel 2011)

Odontomachus rixosus is very similar in general appearance to Odontomachus pararixosus, but is distinguishable from the latter by the weakly notched posterior head margin (almost straight in the latter); the apical spine of the petiolar node is needle-shaped (acutely triangular in the latter); and the first gastral tergite lacks long suberect setae (present in the latter). The delimitation between O. rixosus and Odontomachus minangkabau is discussed under O. minangkabau.

Sorger & Zettel (2011) - There is considerable variation in O. rixosus, especially in size and colour, but it seems unconnected with certain geographical populations. This includes the var. obscurior, described from Myanmar and Thailand (Forel 1900), and later recorded from Palawan by Stitz (1925). In the Philippines, O. rixosus can be recognized by group characters, especially by the elongate and truncate subapical tooth of the mandible. 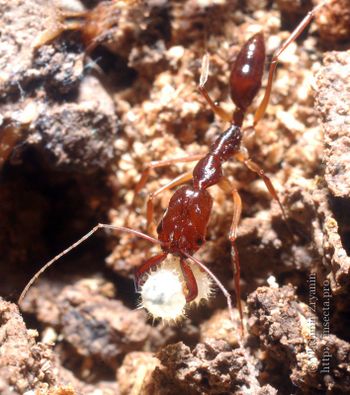 Sorger & Zettel (2011) - The only encounter in the Philippines by the senior author was at a waterfall area in a slightly degraded dipterocarp forest. Observations from Borneo confirm that O. rixosus is a forest species.

The specimen at Oxford University Museum of Natural History labelled as “type” by Donisthorpe may not be so. One cannot be positive as there is no datum number on the disc of this specimen, which merely states “SING” (= Singapore). However, a specimen in The Natural History Museum, labelled “SING. 55/9” has the following information in Acc. Reg.: “1859 no. 9. Singapore (Malacca), purchased of Stevens. Collected by Mr A.R. Wallace.”

I suspect that this The Natural History Museum specimen may be the true holotype but have no way of conclusively proving it. The only evidence in support of this view is that in the original description of rixosus, Smith states that the thorax is “tranversely striated.” The The Natural History Museum specimen more or less fits this description, whereas the Oxford University Museum of Natural History specimen has weakly whorled, not transverse, striation on the pronotum. Unless otherwise noted the text for the remainder of this section is reported from the publication that includes the original description.

Pilosity: Fine loose semi-appressed white pubescence on head, mesosoma and petiole; distance between hairs approximately their length. Head with two standing setae, tergite 1 without setae, tergite 2 with a few setae, number of setae and length increasing towards apex of abdomen.

Males from Thailand are always darker than those from the other localities.