These rare ants, the only species in the genus Myopopone, nest in rotten wood or under bark. Single colonies may be composed of several small nests scattered over a small area. They feed on large, soft-bodied insect larvae and may bring their larvae to food sources rather than attempt to move especially large prey back to their nest.

The mandibles are long and slender, with numerous (always more than 5) teeth which vary greatly in size and are scattered along the inner margins, and with a sharp, pointed tooth at the tip which is only slightly longer than the next longest tooth. The frontal lobes are large and extend well forward of the insertion point of the scapes, and when viewed from the front they cover the underlying clypeus and often form part of the front margin of the head. The antennae have the last few segments distinctly flattened in cross-section. The petiole has distinct front and upper faces but lacks a rear face, and its attachment to the gaster is broad and approximately the same height as the petiole so that the upper surfaces of petiole and gaster are separated by at most a shallow impression.

Although these ants are superficially similar to some Amblyopone, the presence of expanded and projecting frontal lobes and flattened tips of the antennae will separate these genera.

Wilson (1958) - Both the Karema and Bisianumu collections consisted of workers found under the thick bark of large rotting logs on the floor of rain forests. At Bisianumu workers were clustered with larvae around two large, freshly killed cerambycid larvae on the same log. Since the beetle larvae were well separated from one another, and appeared to be too large for the ants to transport through the preformed galleries under the bark, it is inferred that the ants had transferred their own larvae to feed on the prey after the latter had been attacked and killed. The Myopopone are singularly clumsy and shy ants, and immediately commence searching for cover when exposed to light, abandoning their brood in the process. When handled, however, they are capable of inflicting a painful sting.

Ito (2010) - Workers kept with larvae in the laboratory frequently showed larval hemolymph feeding (hereafter LHF). This behavior is very similar to that of queens of Stigmatomma silvestrii Wheeler as reported by Masuko (1986). Workers pinched the larvae with their mandibles and licked hemolymph from the wounds. Workers most often pinched the dorsal integument of the upper abdomen of larvae. Many large larvae had scars which seem to be made by LHF. During 14 h of observations of an orphan colony with 25 workers, LHF was observed 38 times. Twelve of the 25 workers performed LHF. One worker monopolized more than 50% of LHF (21 times) and the others only showed the behavior one to three times. Among workers, we never observed aggressive behavior. The relationship between LHF and ovarian development could not be examined, because colony condition was unfortunately poor at the end of the observation. During the observation period, no egg-laying occurred. 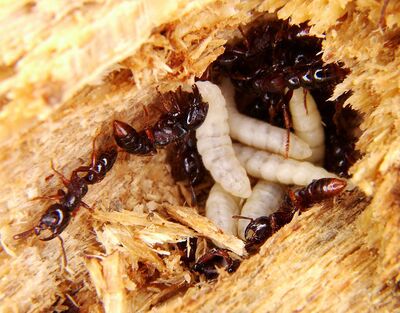 Among amblyoponine ants, the occurrence of LHF has been reported in Amblyopone spp., Prionopelta kraepelini, Adetomyrma sp., Mystrium camillae and Onychomyrmex (Ito & Billen 1998; Masuko 2003; Saux et al. 2004; F. Ito, unpubl. data, 1989, 2002). Even though we still do not know whether queens of M. castanea perform LHF, all genera in this subfamily so far observed show LHF. Although LHF has been found in a handful of ant species outside of Amblyoponinae, e.g. a few species of Proceratium (Proceratiinae), a few species of Gnamptogenys (Ectatomminae), Leptanilla japonica and Leptanilla clypeata (Leptanillinae), and Calyptomyrmex sp. (Myrmiciinae) (Masuko 1986, 1989; Ito 2001; Ito & Gobin 2008; F. Ito, unpubl. data, 2001), this aberrant feeding mode is one of the important characteristics of the subfamily Amblyoponinae.

Length 41/2 lines. Ferruginous; head wider than the thorax, slightly rounded at the sides, and emarginate behind, finely and distinctly punctured above, anteriorly it is longitudinally striated; the anterior margin fuscous; the antennae short and stout; the flagellum clavate; the mandibles with a row of short, stout, acute teeth on their inner margin; the head has a few scattered erect hairs. Thorax: the prothorax subglobose, strongly punctured in front; the mesothorax short and transverse; the metathorax oblong, parallel, and punctured; the apex transversely striated; the legs short, stout, and pubescent. Abdomen: the basal segment strongly punctured, the second and fullowing segments delicately and very sparingly so; the first and second segments deeply constricted at their margins; the apex pointed and pubescent, the pubescence ferruginous.