The genus was described by Ward (1994) from a single species collected in Madagascar. It is an endemic Malagasy genus, rarely collected, with more than half of the described species only known from males.

Ward (1994): (i) absence of a petiole in dorsal view (abdominal tergum 3 lacking a dorsally differentiated pretergite), (ii) gaster large and expanded posteriorly, all terga and sterna unfused and without constrictions, (iii) absence of eyes, and (iv) presence of a very large sting (larger, in relation to body size, than that of any other known ant).

While direct observations are scant it is believed that members of this genus are predators on linear prey. Amblyoponinae are specialized predators of arthropods that hunt prey that live on and under the ground. 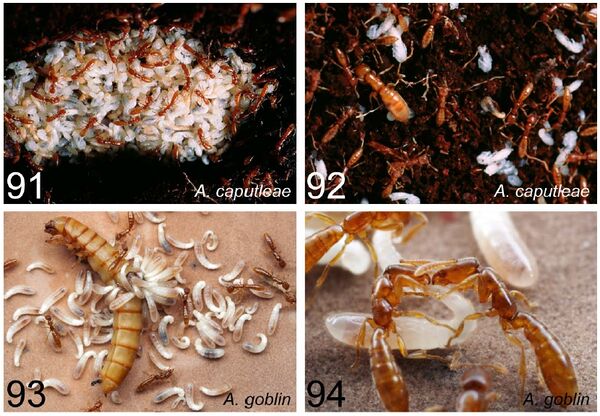 Roughly half of the named species are known only from males.

Queens are known only in Adetomyrma caputleae (ergatoid) and Adetomyrma goblin (alate), and these two queens are easily distinguished by the absence (A. caputleae) or presence (A. goblin) of wings and lateral ocelli. A comparison of the morphology of the males of these two species suggests that larger males with a larger mesosoma are associated with ergatoid queens. If this pattern holds true for the other remaining species, then all Adetomyrma queens other than A. goblin might be ergatoid. 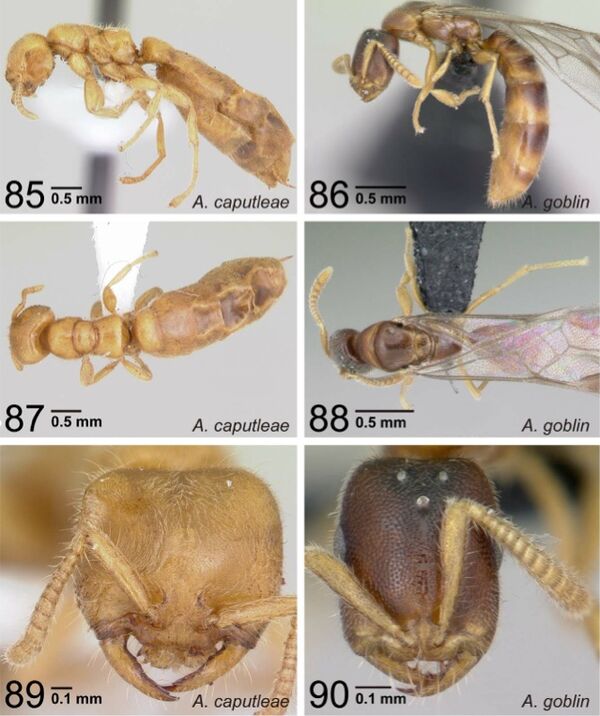 These characters are collated in the table "WorkerMorphology". View table.

Worker diagnosis (putative autapomorphies of the genus are marked with an asterisk; some of these designations are better understood in the context of the phylogenetic position of Adetomyrma): 1. Twelve antennal segments. 2. Mandibles subfalcate, crossing at rest, and without differentiated basal and masticatory margins; inner margin with relatively few teeth (5-6 teeth in the only known species). 3.* Palpal segmentation reduced (palp formula 3,3 in the only known species). 4.* Clypeus reduced to a narrow strip (dorsal view) and deflected ventrally. 5. Anterior clypeal margin with a row of stout, conical setae. 6. Antennal sclerite (or torulus) raised medially, i.e. not horizontal, and fused with the laterally expanded frontal lobes. 7. Frontal lobes weakly developed, only partially covering the antennal insertions in dorsal view, the maximum distance between their outer margins about 14% of HW. 8.* Compound eye lacking. 9. Promesonotal suture unfused and flexible. l0.* Metanotum not evident and mesonotum reduced in size, much shorter than the basal face of the propodeum. 11. Metacoxal cavities tightly encircled by cuticle but the endpoints not fused; metasternal invagination broad and shallow, extending anteriorly between the metacoxal cavities no more than about one third the cavity diameter. 12. Propodeal spiracle large, circular, in an upper and posterior position, almost contiguous with the visible upper margin of the metapleural gland bulla. 13. Metapleural gland well developed, the bulla forming a large conspicuous patch on the lower lateral and posterior faces of the mesosoma, below and behind the propodeal spiracle. 14. Metapleural gland orifice (or meatus) opening posterodorsally, near the centre of the bulla, above a posterolateral swelling of the metapleuron: orifice not overhung by a conspicuous cuticular flap nor confluent with an anteriorly directed, longitudinal groove or impression. 15.* Tergum and sternum of abdominal segment 2 fused anteriorly but not posteriorly; tergosternal suture completely obliterated in the region of fusion. 16. Unfused portion of abdominal sternum 2 triangular, terminating anteroventrally in a well-developed tooth (just posterior to the point of tergosternal fusion), and flanked on either side by a differentiated laterotergite. 17.* Helcial tergite (pretergite of abdominal scgment 3) poorly developed, not set off from the rest of tergum 3 by a constriction, in consequence of which no petiole discernable in dorsal view. 18. Helcial sternite thin, straight (not bulging ventrally), overlapped ventrolaterally by the lower arms of the helcial tergite. 19. Helcial sternite narrower than the poststernite of abdominal segment 3, and positioned much higher than it so that a ventral petiolar constriction is seen in lateral view. 20.*? Helcial sternite strongly bound by connective tissue to the posterodorsal margin of abdominal sternite 2. (In two of four dissections that were performed part of the helcial sternite and adjacent poststernite broke from the rest of abdomen 3 and remained attached to the inside of the petiolar venter.) 21.*? Tergum and sternum proper of abdominal segment 3 unfused, but helcial tergite tightly embracing the lateral margins of the helcial sternite and apparently fused with it. 22.*? Tergum and sternum of abdominal segment 4 unfused and without differentiated presclerites. 23.* Abdominal spiracles 5, and sometimes 6, exposed under normal gastral expansion. 24.* Metasoma large and expanded posteriorly, metasoma1 length about 1.6 times mesosomal length. 25. Pygidium simple, with posterior extremity rounded and hood-like, neither denticulate nor heavily sclerotized or otherwise modified. 26. Gonostylus long and distinctly 2-segmented. 27. Sting very large and barbed, valve chamber small and poorly differentiated from sting shaft: lancet with 7 barbs, sting shaft with 4 pairs of barbs. 28. Sting furcula present, well developed, with dorsal as well as lateral (ventral) arms. 29. Tibia1 spurs 1,1,2; anterior metatibial spur small, posterior spur large, subtriangular and sinuous, its lower margin pectinate, upper margin barbulate; mesotibial spur weakly barbulate, flanked by a minute remnant of the second (anterior) spur. 30. Apical segment of metatarsus enlarged, longer and wider than each of the three preceding segments. 31. Tarsal claws simple. 32. Metabasitarsal gland (Holldobler & Palmer, 1989) absent

The diagnostic characters uniquely observed in Adetomyrma within the subfamily Amblyoponinae are given in italics.

8. Constriction between pre- and post-sclerites on abdominal segment IV absent. 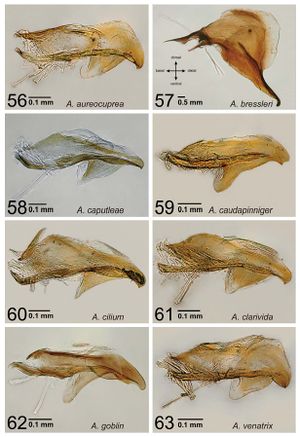 The diagnostic characters uniquely observed in Adetomyrma within the subfamily Amblyoponinae are given in italics.

8. Mesotibia with two spurs in most cases, rarely with single spur.

10. No constriction present between petiole and abdominal segment III in dorsal view.

11. Abdominal segment IV with or without tergosternal fusion.

12. Pretergite of abdominal segment IV not distinctly differentiated from posttergite, without transverse furrow between them.

15. Separation between basimere and harpago usually indistinct but distinct in some species.

17. Basicoventral portion of the aedeagus in lateral view extended basally in most cases, shape of extension somewhat triangular to subtriangular, with relatively sharper distal apex.

20. Radial sector on forewing wholly or partially absent between M+Rs and 2r-rs.

22. 2r-rs on forewing connected with radial sector posterior to pterostigma.

24. cu-a on forewing located far from junction between media and cubitus.

25. Radius absent on hindwing in most cases but rarely weakly developed.

Generic diagnostic characters for the worker caste listed above build on those proposed in Ward (1994). Here we update some of those characters based on new material and new morphological data. The listed characters are consistently observed in all Adetomyrma workers, and distinguish Adetomyrma from the other Amblyoponine genera.

For queens, all worker diagnostic characters are applicable except the developed compound eye and the presence of the constriction between petiole and AIII.