A monotypic genus, known only from the species Martialis heureka, Martialis is also the only genus in the subfamily Martialinae. Originally described from a single worker collected in the field (Rabeling et al. 2008) males are now also known (Boudinot 2105). The latter specimens were found in collections made in 1985. Rabeling et al. (2008): On the basis of the specimen’s external morphology, we are able to infer some aspects of the species’ biology. The pale integument and the absence of eyes suggest that M. heureka lives hypogaeically or in covered low-light environments, like leaf litter or rotting wood. The fact that the first two M. heureka individuals were collected in soil core samples during the day, and the present specimen in leaf litter at dusk, supports this hypothesis. Possibly, M. heureka surfaces during the night to forage. The unusually enlarged procoxae and long front legs could potentially be an adaptation to prey capture. Presumably, they are used less for digging activities, because the legs are relatively thin and lack the characteristic erect setae of actively digging species. We speculate that M. heureka might take advantage of preexisting underground cavities, like hollow rotten roots. The forceps-like mandible type is not seen in any other ant species. These long, filigree instruments could be used to drag soft prey items out of cavities. Annelids, termites, insect larvae, and other soft-bodied arthropods are possible prey. We do not expect M. heureka to prey on heavily sclerotized invertebrates. 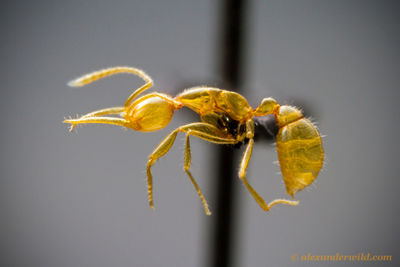 Known from workers and males (male images shown in next section).

Including the characteristics of the subfamily (see Martialinae) + (1*) Mandibles elongate, slender, forceps-like, not crossing at rest (although doing so in dried condition), without differentiated basal and masticatory margins; (2) labrum broad with a U-like insertion at apical margin; (3*) clypeus reduced to a narrow strip at the sides, with a small trapezoidal median portion between antennal sockets, densely covered with a brush of setae; (4) metanotal groove distinct; (5) propodeum evenly rounded at the transition from basal (=dorsal) to declivitous face; (6) propodeal spiracle orifice not enlarged and nearly equally distant from basal and declivitous face of propodeum and the anterior part of metapleural opening, with circular orifice directed posteroventrally; (7) petiole with short peduncle, tergosternally fused, without a trace of a suture between tergite and sternite; (8*) presclerite of abdominal segment IV well developed, posterior part with a girdling constriction, forming the posterior constriction of a weakly defined postpetiole; (9) sting present, but small; (10) mesotibial spur present, simple; (11) metatibial spur present, shortly pectinate. 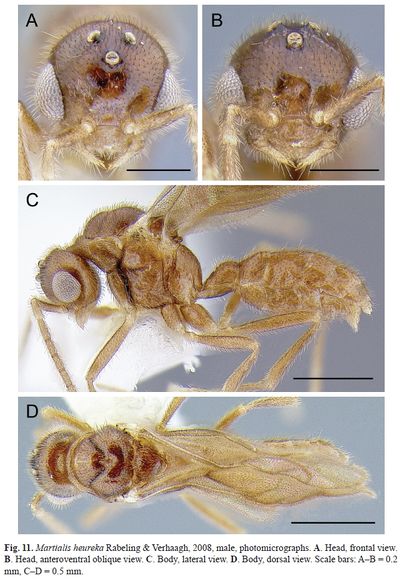 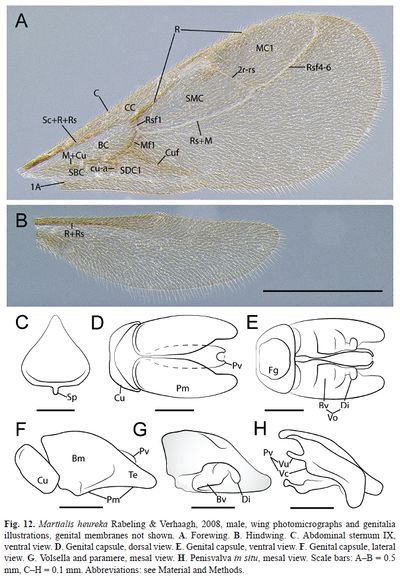 The genus name refers to the unknown combination of aberrant morphological characters, which led Stefan P. Cover and Edward O. Wilson to the conclusion that this ant has to be from the planet Mars; hence, the genus name Martialis (gr.: ‘‘of Mars’’ or ‘‘belonging to Mars’’).