Bingham (1903:121) encountered Cataulacus taprobanae wandering about 'apparently in an aimless sort of way' on the bark and leaves of trees. Their nests were made in hollow branches. It is also known to nest in Humboldtia laurifolia in Sri Lanka (Krombein et al. 1999) and has been observed foraging diurnally and feeding on extrafloral nectaries of Humboldtia brunonis in India (Gaume et al. 2005).

A member of the taprobanae group. One of the relatively few species to inhabit the Indian subcontinent, Cataulacus taprobanae is distinguished by its long, divergent propodeal spines, reduced sculpturation dominated by puncturation and the presence of short, erect hairs on the alitrunk.

Known from Sri Lanka and India. 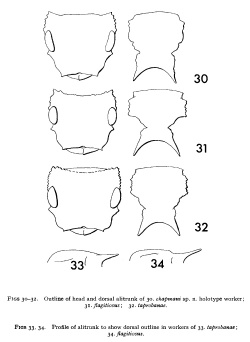 Occipital crest complete or broken but always marked out by a series of denticles which decrease in size medially; those nearest the centre often minute. The crest itself shallowly concave across the width of the head. Sides of head behind eyes denticulate, the occipital corners with a small tooth which is, however, larger than the first denticle of the occipital crest. Sides of pronotum marginate, denticulate, but the sides of the mesonotum weakly or not marginate, with only one or two very small denticles. Propodeal spines long, stout and acute, divergent, the outer margins of the spines and the sides of the propodeum with a few minute denticles. First gastral tergite not marginate laterally.

Dorsal surfaces of head, pedicel, first gastral tergite and appendages with numerous short, stout hairs, also present around the margins of the head and pronotum. Dorsum of litrunk with a few scattered hairs only.

Similar to worker but occipital crest incomplete medially, the median section broadly concave. Denticulation of crest and the sides of the head much reduced. Sides of pronotum with a few small denticles, the sides of the propodeum irregular but not denticulate. Propodeal spines a pair of short, broad, triangular teeth. Sculpturation basically as in worker but with the rugoreticulum of the head and pronotum more pronounced, the scutum and scutellum longitudinally and quite regularly rugose. Distribution of hairs as in worker but those on the head are shorter and less distinct. A transverse row of short hairs is present on the pronotum just anterior to the promesonotal suture.

Occipital crest shallowly concave, usually complete but broken medially in some individuals. The crest denticulate, very feebly so medially, the largest denticles being those closest to the short, triangular occipital tooth. Sides of head behind eyes denticulate. Sides of pronotum irregular but not definitely denticulate. Notauli with only the anterior arms developed, and usually only the distal portions distinct and cross-ribbed; the posterior arm absent. Parapsidal furrows present. Propodeum with a pair of short but acute projecting teeth. Apical portions of parameres smooth and shining. Head and pronotum loosely reticulate-rugose, the rugae of the former raised into minute peaks at many of the points of intersection. Reticular inters paces finely and densely reticulate-punctate. Mesoscutum and scutellum finely longitudinally rugose, the gaster finely and densely reticulate-punctate with some basi gastric costulae present. Hairs numerous on all dorsal surfaces, much more conspicuous than in the other castes.