Within its range Cataulacus guineensis is the most common Cataulacus species in forested areas of West and Central Africa.

A member of the guineensis group. The worker is distinguished by the presence of a well-developed spine or tooth upon the posterolateral portion of the pronotum, Other species sharing this feature are separable on characters of sculpturation and size.

Bolton (1974) - Mature nests are usually populous, containing several hundred workers, and are formed in rotten branches of otherwise healthy trees, often a considerable distance above the ground, The nests are usually begun by a queen entering a tunnel previously made in the branch by wood-boring beetles or termites; the galleries are later extended by the ants themselves, The preference seems to be for branches which are quite unsound and extensively tunelled previously, either by beetles or termites, and the further activities of the ants tends to weaken the branches to such an extent that they may fall off during storms. This was actually observed by the author in 1969 at the Cocoa Research Institute of Nigeria station at Gambari, when a rotten branch of a cocoa tree containing a large colony broke away during a rainstorm, The ants were seen later moving their brood up an adjacent cocoa tree where they took up residence in another rotten branch. Forel (1916: 427) recorded this species inhabiting an abandoned wasp nest on the trunk of a tree at Motombe on the Okiavo, Zaire, and noted that at St. Gabriel guineensis was running amicably with a Crematogaster species. This last is not unknown and I have confirmed that guineensis is able to occupy trees in areas dominated by both Crematogaster striatula and Crematogaster clariventris; however, guineensis seems to be excluded from areas infested with the rather belligerent Crematogaster depressa, along with many other arboreal forms. Workers of guineensis have been observed tending aphids and small coccids but, although the workers spend much time wandering upon the tree and occasionally descend to the ground, predatory behaviour has not been noted.

When approached by a potential predator the reaction of the individual ant varies, apparently with the size of the attacker. Workers of guineensis occurring upon a tree dominated by Oecophylla longinoda will try to avoid contact with workers of that species. If that is impossible, they become completely immobile and rely upon their armour for protection. If, however, the aggressor persists in its attentions, or if the predator is large, the guineensis worker rolls up, releases its grip on the bark and escapes by falling into the undergrowth. Wheeler (1922a : 199) recorded this species from the stomachs of the toads Bufo tuberosus Gunther and B. polycercus Werner.

Yanoviak et al. 2005, 2007, 2008 - Cataulacus guineensis has been collected from a nest in the canopy of a secondary-forest tree, in sampling conducted in tree crowns, in Gamba, Gabon. It was anecdotally reported to be subordinate at tuna baits. C. guineensis has been shown to exhibit directed movement while in freefall that allows workers that fall or purposely detach from a tree to glide back and regain a hold on the same tree trunk. This gliding behavior is shared with numerous members of the tribe Cephalotini, and other genera as well.

Workers can be quite variable in size, even within a single nest.

Bolton (1974) - The majority of the synonyms were based on variation in sculpturation in the worker, but parallelus was founded on what is now known to be a perfectly ordinary female of guineensis, The only strange thing about parallelus is its type locality, given by Smith as Cape of Good Hope. Arnold (1917:402) noted that the species did not appear to have been recorded since Smith's time and the present survey seems to indicate that South Africa is outside the range of guineensi. It seems probable that the locality is an error.

In Stitz's description of sulcatus he recognizes the affinity of his species to erinaceus but was not aware that he was dealing with a known species, The synonymy of sulcatus to guineensis occurred in the same year as the publication by Stitz, but the varieties alenensis and fernandensis continued to be used. These were based on smaller workers and sculptural differences were invoked to maintain their separation, However, Santschi (1937b: 102) noted that the individuals of the var, alensis [sic] were very variable in sculpturation, and the present study has shown that these variations are in fact of quite common occurrence in normal nests. 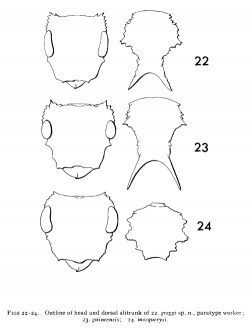 Occipital crest absent although the vertex is usually separated from the occiput by an obtuse angle. More rarely the two surfaces join through a continuous curve. Occipital corners with a single acute tooth. Sides of head behind eyes denticulate, often strongly so. Pronotum marginate laterally, the margins with usually 2-4 rather large denticles and terminating posterolaterally in a large spine or tooth which is very distinct, being several times larger than any of the denticles preceding it upon the margin. Sides of mesonotum and propodeum rounded, immarginate, usually without denticles. Propodeum with a pair of very long, divergent spines. Promesonotal suture variable in development, usually present as a faint impression upon the dorsal alitrunk, rarely more strongly developed but often completely absent. First gastral tergite not marginate laterally.

Sculpturation extremely variable. Dorsum of head usually with a very fine, loose rugoreticulum which becomes much coarser behind the eyes. Interspaces finely reticulate-punctate but these are often effaced, leaving the surfaces almost smooth. Sculpturation of dorsal alitrunk basically a longitudinal rugulation or sulcate-rugation, with very finely punctured interspaces. Differences in intensity of development of this sculpturation are numerous, and the rugae are often wavy or irregular, especially upon the pronotum. Variation of sculpture on the alitrunk extends from forms in which the entirety of the dorsum is covered with strong, irregular, longitudinal rugae to forms in which the sculpturation is mostly effaced, with just a trace of rugation remaining. The space between the propodeal spines is usually strongly transversely rugose. Pedicel segments coarsely rugose. First gastral tergite reticulate-punctate with scattered fine, predominantly longitudinal rugulae.

Development of stout, erect hairs variable. Usually they are present upon all dorsal surfaces of the head and body but may be reduced both in number and size, and rarely, in some individuals may be almost completely absent. A row of outstanding hairs is always present upon the sides of the head behind the eyes and the lateral margins of the pronotum. Intensity of sculpturation and degree of development of hairs is very often related to the size of the individual, with smaller workers tending to be more hairy and more coarsely sculptured than larger workers.

As worker, with the pronotal marginal tooth very much reduced or absent and with the propodeal spines relatively much shorter. Pronotum usually quite strongly reticulate-rugose but the mesoscutum longitudinally so. In the females examined the presence of reticulate-punctate interstitial sculpturation upon the alitrunk is rather more strongly developed than is usual in workers, and in some females the rugation of the head has a markedly longitudinal trend.

Structure of head basically similar to that of worker, with dentate occipital corners and denticulate sides behind the eyes. Anterior arms of notauli strongly developed, extending almost the length of the sclerite, scarcely or not at all joined before the suture so that the posterior notaular arm is extremely short or absent. Sides of pronotum marginate and denticulate; propodeum armed with a pair of short but strong, acute spines. Head strongly reticulate-punctate with scattered fine rugulae; the latter tending to form a loose reticulum behind the level of the ocelli. Pronotum similarly sculptured, the reticulations usually widely spaced. Anteromedian portion of mesoscutum with a long, narrowly V-shaped area of unsculptured, polished cuticle; the remainder of the segment sculptured as the pronotum, Propodeum very heavily and coarsely rugose, strongly reticulate-punctate. Erect hairs numerous everywhere.