Nothing is known about the biology of Cataulacus kohli.

A member of the huberi group. A quite distinctive medium-sized species. The strongly flattened hind femora, form of sculpturation and lack of dorsally situated hairs coupled with a complete absence of denticles render this species quite easily recognizable. (Bolton 1974)

Mostly confined to the rain forest areas of West and Central Africa, but does occur in East African forests (Bolton 1974). 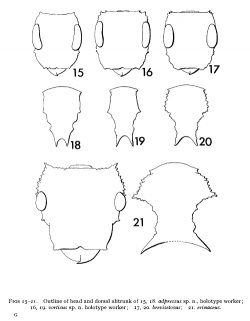 Occipital crest developed as a low but sharp, unarmed ridge running the width of the head and separating vertex from occiput. It is better developed in larger than in smaller workers, and is concave in its median portion. Occipital corners rounded, without teeth or denticles; the sides of the head behind the eyes not denticulate. Alitrunk not denticulate on the lateral margins. Humeral angles of pronotum rounded, not produced into a point; the shape of the pro notal margination somewhat variable but usually with a broad, rounded, subtriangular process anteriorly, subtended by a simple ridge posteriorly. The process is almost a broad and much-flattened tooth in smaller workers but is less well developed in larger individuals. Mesonotum and propodeu.n not marginate, the latter armed with a pair of long, acute, tapering spines. Dorsum of alitrunk without trace of sutures or with the promesonotal suture faintly indicated. In the largest workers the path of the metanotal groove may be visible, but is always extremely faint and is never impressed. Femora, especially of the hind legs, strongly antero-posteriorly compressed, narrow and very deep. First gastral tergite weakly or not marginate laterally. When margination is distinctive it is strongest basally, petering out well before the apex of the segment.

Sculpturation of dorsum of head capsule usually finely granulose with scattered, superimposed shallow pits or foveolae. Laterally, close to and behind the eyes are some fine rugulations which tend to curve towards the midline of the occipital margin. Rarely, and usually in smaller workers, these rugulae are also present in the centre of the dorsum. Alitrunk, especially the mesonotum and propodeum, finely and densely reticulate-punctate with fine, scattered longitudinal rugulae. Pronotal dorsum more variably sculptured, the rugulae may even run transversely on the anterior portion. Petiole transversely rugose; the anterior face of the postpetiole longitudinally rugose. First gastral tergite finely and densely reticulate-punctate, overlaid by dense, very fine, virtually parallel rugulations which are arranged in a broadly circular or oval pattern around the sclerite or are convergent on the midline anteriorly.

Dorsal surfaces of head, alitrunk and gaster without hairs. Hairs are abundant upon the legs and a row of very short, blunt hairs projects from the lateral margins of the head behind the eyes. Lateral pronotal margins without such a projecting series of short hairs.