Nothing is known about the biology of Cataulacus simoni.

Cataulacus simoni appears to be restricted to Sri Lanka and the Andaman Islands. 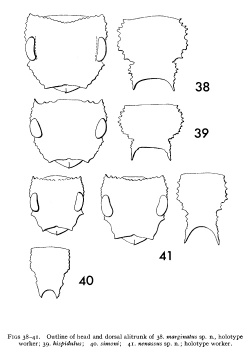 Occipital crest complete or in some cases incomplete medially, armed with small denticles. Sides of head behind eyes minutely denticulate, terminating in a large denticle at the occipital corner. The head relatively long and narrow, with relatively large eyes. Lateral margins of alitrunk minutely denticulate along their length, the denticles spaced out and usually extending onto the lateral margins of the propodeal spines. Alitrunk broadest across the pronotum, the sides converging posteriorly in dorsal view; the alitrunk laterally without a pronounced U- or V-shaped notch or impression between the mesonotum and propodeum. Propodeal spines varying from a pair of distinct, relatively broad, short structures to a pair of small teeth. First gastral tergite not marginate laterally.

Dorsum of head with numerous short, distinctly and strongly clavate hairs which in some cases appear almost globular, with a short stem. Similar hairs are present upon the dorsal alitrunk but are more sparse, whilst upon the gaster the hairs are normal, short, thick, and blunt.

As worker but with reduced denticulation on the head and alitrunk. Propodeal spines proportionately smaller than in the worker, reduced to a pair of short, triangular teeth. Sculpturation and form and distribution of hairs as worker, but the mesoscutum and scutellum longitudinally rugose, more regularly so upon the former than the latter where the rugae are somewhat sinuate. Gaster very much longer than broad, the first tergite 1.70 long and 1.04 wide at maximum in the female examined.