Nothing is known about the biology of Cataulacus pullus.

A member of the huberi group. In the specimens so far examined the structure of the pronotal margination has been reasonably consistent; but in view of the variability of this region in closely related species (huberi, etc.) it is to be expected that specimens will eventually be found which differ in this respect from the above description. The species is perhaps best distinguished by the characters used to separate it in the key. (Bolton 1974)

Known from Congo, Guinea and Kenya. 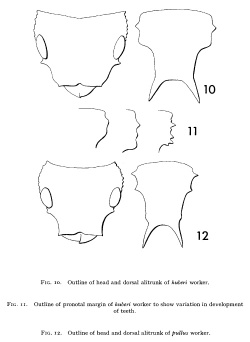 Occipital crest absent, the vertex curving into the occipital surface which is shallowly concave in larger workers. Occipital corners with a single, broad triangular or subtriangular denticle or tooth, which is usually continued towards the midline as a short, sharp ridge. Sides of head between eyes and occipital corners denticulate or crenulate or merely irregular in largest workers. Pronotum marginate laterally, the remainder of the alitrunk not marginate, the dorsum curving into the sides. On the pronotum the margination is expanded laterally, beginning just behind the acute humeral angles, and usually bears two teeth. The anterior of these two teeth is larger and is separated by a distinct gap from the posterior teeth; this latter is situated towards the posteriormost point of the pronotal margination, which peters out before the junction with the mesonotum. Promesonotal suture absent or its track marked by an extremely faint impression, showing its former position. Propodeum with a pair of long, acute slightly divergent spines. Ventral processes of petiole and postpetiole well developed, the former usually showing a well developed posteroventral tooth or spur; the latter short, spiniform or dentiform. First gastral tergite not marginate laterally.

Dorsum of head extremely finely, densely and shallowly reticulate-punctate, dully shining; the whole surface except the clypeus overlaid by a fine, loose, disorganised rugoreticulum. Pronotum, especially on anterior half, sculptured as head, but on the remainder of the dorsal alitrunk the rugulae tend to take on a distinct longitudinal trend. In smaller workers the rugulae may be reduced or absent on the mesonotum, leaving the sclerite merely reticulate-punctate. Petiole and postpetiole coarsely rugose, the rugae often directed longitudinally upon the former. First gastral tergite reticulate-punctate or also with a fine rugoreticulum.

Erect hairs absent from dorsal surfaces of head behind clypeus and dorsum of alitrunk, present upon clypeus, lateral margins of head, pedicel, appendages, and usually also on first gastral tergite.