Wheeler and Wheeler (1986) - We have published 4 articles about this interesting species (Wheeler and Wheeler, 1956, 1959, 1965, 1967); here we give only a sketch of our findings: (1) lobognathus is a characteristic inhabitant of the Pinyon-Juniper Biome, a semiarid environment. (2) In the Dakotas the nests were found only on steep treeless south-facing slopes where much of the surface was bare. The slopes were always near junipers which were on north-facing slopes. Characteristic plants of the habitats were grasses in clumps, low shrubs, yucca, and prickly pear. (3) Nests in the Dakotas were of 2 types: in sandy loam, under large flat stones (average 8 x 46 x 91 cm) which were only slightly buried; where the soil contained numerous small stones there was a small mound of excavated earth around the entrance. (4) The seeds of grasses were harvested. (5) The workers were aggressive and bit tenaciously. (6) We regarded lobognathus as a mimic of Pogonomyrmex occidentalis.

By far the most outstanding characteristic of lobognathus is its extraordinary resemblance to Pogonomyrmex occidentalis in sculpture and pilosity. The dull, strongly coriaceous head with its broad band of circumocular rugae is startlingly similar to that of occidentalis. The similarity is further increased by the unusual hairs of lobognathus, which are coarse, blunt, and of rather uniform length. Since the hairs in the other species of Veromessor tend to be slender, pointed, and very irregular in length, this difference is all the more surprising. In its more fundamental characters, the structure of the thorax, petiolar nodes, clypeus, and frontal lobes, lobognathus plainly shows itself to be a true Veromessor. (Wheeler and Creighton 1934)

Southwestern North Dakota, western South Dakota, southeastern Montana, Colorado, Utah, Idaho, and Nevada. We still regard this species as a rare ant, in spite of Cole's flat assertion to the contrary (Cole, 1966:72; Allred and Cole, 1971:242). It can be very abundant locally, but as far as its range is known it is highly sporadic and severely restricted. We once (Wheeler and Wheeler, 1967) described its range as "a sigmoid curve 1300 miles long, extending from southern Nevada to southwestern North Dakota." This is still approximately correct, except that we must insert an Idaho locality (30 mi. W Idaho Falls); and furthermore our intensive collecting has revealed that the curve splays out in Nevada, where the species is widely scattered. (Wheeler and Wheeler 1986) 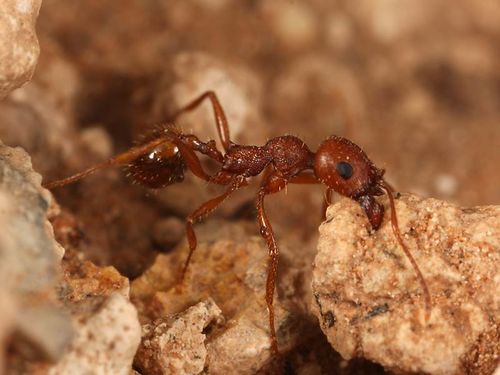 Head subquadrate, as broad as long (mandibles excluded), the sides approximately straight, a trifle narrower in front of the eyes than behind them. Occiput flat, with the occipital angles broadly and evenly rounded. Anterior margin of the very short clypeus straight, with a shallow V-shaped median impression. Eyes oval, moderately large and feebly convex, placed at the middle of the sides of the head. Mandibles large and strongly convex in two planes, so that the lobed tip of the masticatory margin is carried back beneath the mandible and is not noticeable unless viewed from a point in front of the lower margin. This lobe, which appears to consist of three fused teeth, is sharply set off from the remainder of the masticatory margin. Frontal carinae subparallel, rather thick and short, with a welt-like portion which extends from the anterior end encircling the front of the antennal fossa. Antennal scapes in repose surpassing the occipital border by an amount slightly in excess of their greatest thickness, the basal end of the scape flattened and strongly spatulate. Distal to the flattened portion the diameter of the scape gradually increases toward the slightly swollen tip. First and last funicular joints of equal length, the remaining joints all much shorter; the diameter of the funicular joints gradually increases distally, so that no distinct club is formed although the apical are almost twice as thick as the basal joints.

Dorsum of promesonotum, seen in profile, evenly and moderately convex; the mesoepinotal suture with a broad, flattened impression whose posterior boundary is marked by a slight ridge on the basal face of the epinotum'. Basal face of the epinotum flat and feebly sloping, forming a sharp angle with the shorter declivous face, their angle armed with two spines of moderate length. Seen from above, the promesonotum is pyriform and notably broader than the remainder of the thorax; the mesoepinotal suture forms a narrow slot-like groove between the mesonotum and epinotum without constriction of the sides in that area. Epinotal spines feebly divergent and very slightly incurved, their length slightly more than half the distance between their tips.

Petiole, seen in profile, with a thick anterior peduncle whose dorsum forms a continuous slope with the anterior face of the node. Lower surface of the peduncle with a small ,anterior tooth. Node of the petiole small and low with a flattened summit, which slopes backwards to the short posterior face. Posterior peduncle short and very thick. Postpetiole in profile with a feebly convex dorsum and a well-marked impression in the middle of the ventral surface, the posterior portion slightly constricted at its junction with the gaster. Seen from above, the sides of the petiole are parallel as far forward as the two rather prominent spiracles, anterior to which the peduncle is much narrowed by a semicircular impression at either side. Postpetiole almost twiee as wide as the petiole, subtriangular. Gaster rather large, oval. Legs long, the femora somewhat incrassated.

Mandibles shining, with rather coarse but shallow longitudinal striae. Clypeus granulose, subopaque. Frontal area shining. Head opaque, completely covered with fine longitudinal rugae, the interrugal spaces coriaceous. Rugae along the median portion of the head not divergent, the lateral rugae encircling the eye. Antennal scapes finely granulose, feebly shining. Thorax slightly shining, the rugae with which it is completely covered more irregular and coarser than those of the head. Petiole and postpetiole finely granulose, opaque. Gaster and legs shining.

Hairs moderately abundant, stout, erect, and golden. Gular ammochaetae moderately developed, the inner row of long curved hairs flanked at the side by additional hairs which are shorter and less regularly placed. Inner surface of the mandibles with numerous long hairs, those on the outer surface short, fine, and suberect. Clypeus with a fringe of long curved hairs. Except for two or three long hairs on the front, the remainder of the head is covered with short, stout, and rather blunt hairs of fairly uniform length. Hairs on the pronotum about equal in length and abundance to those on the occiput. Hairs on the epinotum much sparser. Petiole with a tuft of very coarse hairs arising from the posterior face of the node. Dorsum of the postpetiole with numerous coarse, long hairs; those of its lower surface, shorter, sparser, and much finer. Hairs on the gaster relatively sparse, uniformly distributed over the first segment; over the rest of the gaster confined to an irregular row at the posterior edge of the segment. Femora with sparse, short, erect hairs; those of the tibiae, tarsi, and antennal scapes shorter, much more numerous, and suberect. Hairs on the funiculi very fine, grading into pubescence toward the tips.

Color clear orange yellow, the posterior gastric segments, except the terminal segment, which bears a castaneous band, somewhat lighter than the remainder of the body. Clypeus and mandibles tinged with brown, the masticatory margin of the mandibles piceous.