Workers are small, dark-colored and shiny. When seen in the field they superficially resemble small dark colored Monomorium workers. Colonies are polygynous and have a high proportion of queens to workers.

Mackay (2000) - A member of the Temnothorax longispinosus species complex. This is a small, dark species with an 11-segmented antenna, Most of the head and mesosoma are smooth and shining, rugae are present on the lower surfaces of the side of the mesosoma, the petiole and postpetiole are finely punctate, the gaster is smooth and glossy. None of the sutures break the dorsum of the mesosoma, the propodeal spines are well developed, long and slender, the petiolar node is low and rounded and the subpeduncular process is poorly developed.

This species is known to be abundant in some areas of North Carolina. In Alabama and Mississippi its has not been frequently collected. 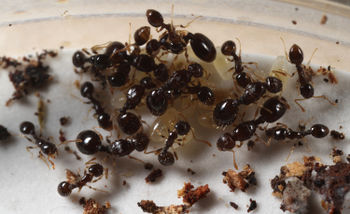 The Tuscaloosa type colony was found in a small cavity in a bank of earth under a bed of moss. It was at the base of a large oak in an open area fringing a bay-gum swamp. The Elrod colony was found in a small cavity in the earth covered partly by an overhanging root and party by thin leaf litter. It was in a densely shaded area also on the fringes of a bay-gum swamp. Stray workers were taken during the day on low bushes near both nests. (Wilson 1951) 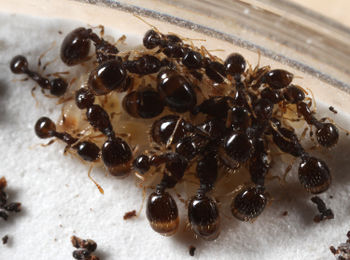 This ant is common in Eastern North Carolina.

This species is often found nesting in hickory nuts and acorns. Nests can have more than 50 individuals. Colonies are polygynous, often with a high ratio of queens per worker. Workers forage on the ground and these individuals are captured in pitfall traps and litter sampling.

Carter (1962): "All records for this ant were obtained by Berlese funnel from leaf mold and litter. Piedmont collections were taken on May and July 24, 1958, in an oak-hickory-beach forest located west of Durham on N. C. State Highway 98. This mesic stand occupied a moderate slope facing a densely shaded mixed hardwood bottomland forest. Coastal area collections were obtained from oak-hardwood and oak-beech forests. Individuals were especially common in litter sample from the oak-beech forests of Flanner's Beach near the Neuse River. Almost all collections were taken from litter gathered at the base or in the vicinity of beech trees. The Haveloek record was obtained from litter accumulated around the base of a single large beech within an oak-loblolly pine forest. The Kinsont collection, however, was obtained from an oak-hardwood forest. Coastal plain collections were made in June, July, and August."

Holotype worker. - Total length approximately 1.9 mm.; length of alitrunk, measured from the dorsal base of the pronotal collar to the tip of the posterior propodeal flange, 0.554 mm.; length of head, measured in profile from the anterior margin of the clypeus to the extreme occipital border, 0.512mm.; cephalic index 93.5. (All measurements except total length given in this description with a maximum error of +0.016 mm.)

Eye oval, moderately prominent, with nine ocelli across its greatest length, located nearer the anterior than the posterior border of the head. Head subrectangular, with weakly convex posterior border, rounded posterior angles, and weakly convex, subparallel sides. Clypeus depressed, 1.2 times longer than broad, its anterior border rounded and entire. Antenna eleven-segmented; scape failing by approximately its greatest width to meet the occipital angle; funicular club three-jointed, as long as the remainder of the funiculus, the apical segment longer than the preceding two combined. Mandible with five teeth, the apical tooth the largest. Alitrunk slender, seen from above 0.272 mm. across its greatest width at the pronotum, evenly arcuate in profile, sloping to the base of the propodeal spines; humeri well rounded; pro-mesonotal and mesoepinotal sutures absent; other thoracic sutures weak or absent. Propodeal spines slender and acute, slightly and gradually curved inward and downward, approximately as long as the declivious face of the propodeum, the basal portions in profile forming an angle of approximately 1200 with the basal face of the propodeum, their bases 0.096 mm. apart. Femora and tibiae noticeably incrassated. Petiolar node in profile with anterior face concave, and meeting the dorsal face in a bluntly rounded angle. Dorsum of postpetiole 1.5 times broader than long, not constricted in posterior half, with subparallel sides.

Mandibles covered dorsally by close-set, longitiudinal striae. Clypeus with a dark median carina running from anterior to posterior border; the remainder of the clypeus more or less longitudinally rugulose. Frontal area, frontal lobes, and cheeks rugulose. Remainder of head, most of the thorax, and the gaster moderately shining, with extremely fine punctures. Propodeum and meso- and metasternal regions of thorax rugulose, the rugulae of the declivious face of the propodeum transverse. Petiole and postpetiole densely and coarsely granulose.

Body covered by moderately abundant, long, coarse, grayish, erect hairs. Antennae with moderately abundant, short, very fine hairs over entire surface; many of these hairs on funiculus and a small number on scape sub erect to erect but the maj ority appressed. Legs with a sparse growth of hairs similar to those on antennae; most of these appressed by a scattered few suberect to erect.

Gynetype. - Differing from the worker in the usual characters separating these two phases. Total length approximately 2.7 mm., length of alitrunk 0.912 mm., greatest width of alitrunk 0.576 mm., length of head 0.568 mm., cephalic index 100. Propodeal spines short and robust, their length less than the distance between their bases and approximately half the length of the declivious face of the propodeum. Sculpturing, pilosity, and color essentially the same as in the worker.

No Males known for this species.

The holotype worker, the gynetype, and forty-two paratypes consisting of seven dealate queens and thirty-five workers were collected by the author (Wilson) August 20, 1947, in a small patch of woods directly north of Guthrie's Nursery, which is at the Tuscaloosa Memorial Cemetery near the outskirts of the city.

Thirteen paratypes consisting of two dealate queens and eleven workers were collected by Barry D. Valentine and the author (Wilson) May 10, 1949, in the Sipsey River swamp several miles east of the town. Elrod, Tuscaloosa Co., Ala.

As reported in Mackay (2000) types were seen from the "USNM, MCZC and the University of Alabama" collections.

Tuscaloosa, Alabama. in a small patch of woods directly north of Guthrie's Nursery, which is at the Tuscaloosa Memorial Cemetery near the outskirts of the city.

Elrod, Tuscaloosa Co., Ala. Paratypes from east of Elrod, Alabama near the Sipsy River Swamp.

Mackay (2000) reports: "My family and I visited both type localities on 8-vi-1998, and discussed the situation with Mrs. Nevada B. Hubbard, who has been secretary at the Memorial Park Cemetery since the 1940's. The site of Guthrie's Nursery is now part of the Tuscaloosa Memorial Park Cemetery. The type locality is now north of the cemetery shop, situated in Lots 7 and 8 of the cemetery, which is now in use. We were unable to locate this species inside the cemetery. Mrs. Hubbard graciously allowed us to collect in an undeveloped area of the Cemetery, covered with trees and dense foliage. Unfortunately this area is heavily infested with Solenopsis invicta (even the dense forest) and few ant genera were found in the area." and "We also visited the second type locality on the same day, which is located at the Sipsey River Swamp, 2 k E Elrod. This area is heavily disturbed, but is still a swamp with dense vegetation. We thoroughly searched the area, including vegetation, but did not find this species. Solenopsis invicta also occurs in the area, but is not the dominant ant."