Nests in both soil and wood, and is commonly found nesting in nuts (Booher et al., 2017).

Bolton (2000) - A member of the Strumigenys rostrata-group. Of the seven species in the group Strumigenys chiricahua and Strumigenys hyalina are immediately separated as they are the only ones to have a mandibular diastema that is decidedly longer than the basal tooth. Strumigenys californica is isolated by the presence of distinctly sculptured zones at the apices of the first gastral tergite and sternite, these zones remaining smooth and polished in all other species. In the relatively large rostrata (HL 0.61-0.72, HW 0.42-0.47) the dentition is coarse, with teeth 6 and 7 enlarged (see above), and its specialised projecting pilosity is characteristic: stout simple hairs are present in apicoscrobal position, at pronotal humerus and on mesonotum (one pair). The remaining three species, Strumigenys arizonica, Strumigenys bunki, Strumigenys carolinensis, average smaller (HL 0.54-0.64, HW 0.37-0.41) and have much smaller finer dentition (in particular teeth 6 and 7 are insignificant), nor do they have pilosity like rostrata at all the points mentioned; in particular all three lack an apicoscrobal hair. S. carolinensis has a pair of long flagellate hairs on the mesonotum, not developed in arizonica and bunki where mesonotal hairs are simple or absent. These last two species separate on relative development of spongiform tissue (see key) and on the complete lack of mesonotal standing hairs but presence of long fine gastral pilosity in bunki. Compared to this arizonica has a single pair of short simple erect hairs on the mesonotum and the first gastral tergite is sparsely clothed with very short stubbly simple hairs.

Flagellate hairs that project from the dorsal (outer) surface of the hind basitarsus are absent in rostrata and arizonica, always present in carolinensis. In bunki some specimens show such hairs, others do not. Because most bunki I have seen have been badly treated and poorly mounted I suspect that these fine and delicate hairs have been mostly stripped away and that they will always be present in fresh material. 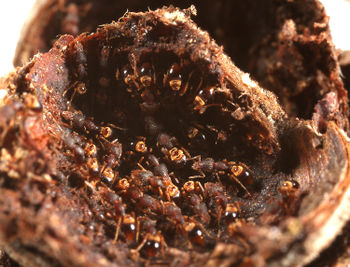 Wesson and Wesson (1939) - Jackson, Pike, Ross and Scioto counties, Ohio. We have taken this species in both soil and wood, sometimes in decidedly dry situations. Three colonies were found in a hickory log, the decaying portion of a large elm tree in which also lived a colony of Aphaenogaster tennesseensis, and in a crevice in a stump in a wooded pasture, a few centimeters from another colony of A. tennesseensis. Three colonies were taken on the edge of some dry oak woods, all in or on the humus just under the dry oak leaves, which, with some grass and herbs, covered the ground. The nesting site of one was a rotten hickory nut; the second was in some cavities in a small decayed stick; the third was living in a crevice of a partly buried board. Workers were found under the leaves in the vicinity of the nests, presumably foraging. They were not apparently associated with any other ants. A few dead springtails were found in one of the nests. On one occasion a colony of S. rostrata was found living in a chamber in dry soil under a stone. Under the stone there also ran a few galleries of Lasius umbratus.

A S. rostrata colony was transferred to an artificial nest for observation. While employing the same general methods of hunting springtails as the other species studied, the rostrata workers differ in being more active. Instead of crouching in one spot awaiting the advent of a springtail, they spend most of their foraging time moving over the debris in the nest. When a worker scents a springtail 2 or 3 mm. away, she crouches, and, without touching it, tries various avenues of approach until she is so close that her mandibles almost touch the springtail. Then, head lowered, mandibles closed, antennae partially folded, she waits until the springtail, unaware of her presence, walks against her head. Then, seizing it with a quick snap of her mandibles, she quickly dispatches it with her sting. If, on the other hand, the springtail moves away from the ant, the latter repeats her approach. If the springtail shows no inclination to move within a few minutes, the ant often acts as though impatient, and tries to examine it with her antennae, or to take it in her mandibles.

TL 2.4-2.8, HL 0.61-0.72, HW 0.42-0.47, CI 66-68, ML 0.10-0.14, MI 17-20, SL 0.28-0.32, SI 67-72, PW 0.28-0.32, AL 0.61-0.69 (30 measured; incorporating maximum and minimum dimensions of Brown, 1953a). Basal lamella longer than any of the teeth, feebly recurved; without a diastema between lamella and basal tooth. Teeth 1-5 strongly developed, coarse and conical; teeth 3 and 5 are longer than 4; tooth 3 is longest on the margin but only slightly more so than tooth 5. Teeth 6-7 also strongly developed and conical, shorter than 1-5 but not much shorter than 4, so that in full-face view the entire visible margin has a coarsely 7-dentate appearance. Anterior clypeal margin extremely shallowly concave. Eye with 4-5 ommatidia in the longest row. Basigastral costulae numerous and sharply defined, extending about one-quarter the length of the tergite. Apicoscrobal hair fairly stout and curved, blunt or truncated apically. Cephalic dorsum with 4 curved suberect hairs close to occipital margin. Pronotal humeral hair stout, straight or only very shallowly curved; a single similar pair on the mesonotum. First gastral tergite with standing filiform hairs arranged in a basal and an apical transverse row; tergite between these rows usually without standing pilosity, rarely with a few hairs present. Dorsal (outer) surfaces of middle and hind basitarsi without projecting long fine flagellate hairs.