The few known non-type specimens are from leaf litter samples of Bamboo forest and rainforest.

Bolton (2000) - The only member of the Strumigenys beebei-group. This moderately sized species has a characteristic head shape. In full-face view the head is elongate, with concave clypeal and occipital margins (HL 0.62 - 0.64, HW 0.42 - 0.44, CI 68 - 70) , and occipital lobes that are only very slightly broader than the clypeus. The upper scrobe margin is shallowly concave between the convex lateral margins of the clypeus and the occipital lobe. In profile the basal portion of the mandible curves upwards very tightly around the anterior border of the clypeus. The slender scapes are of moderate length (SI 57 - 62). The eye has 4 or 5 ommatidia in the longest row. Sculpture is reduced, with faint reticular patterning anteriorly on the head and weak punctulate to rugulose sculpture below and behind the scrobe . Pronotum almost smooth . Mesonotum and propodeal dorsum feebly reticulate-punctate to weakly rugulose, with weak punctulate sculpture on the upper half of the declivity. Sides of alitrunk unsculptured . Dorsum of petiole node weakly rugulose but disc of postpetiole glassy smooth. Basigastral costulae strong and sharply defined. With petiole in profile the anterior face of the node is shorter than the long shallowly convex dorsum.

Brown (1950) - Beebe removed the type series from jungle mould under a tree on the outskirts of Belem. In the same sample were numerous Collembola and 16 other species of ants, including a dealate female of Strumigenys subedentata.

Head 1 1/2 times as long as broad, slightly broader behind than in front, with deeply excised posterior and more feebly excised lateral borders and broadly rounded anterior and posterior corners; behind feebly convex, flattened in the middle and with sloping clypeus. Mandibles convex, with about 8 slender and crowded teeth, which are longest at the apex. Clypeus much broader than long, flattened, with arcuately and deeply excised anterior and convex posterior border. Antennal scapes tenuous at the base, somewhat thickened and fusiform in the middle. First funicular joint fully twice as long as broad and much broader than the two succeeding joints; second joint longer than broad, third as broad as long; fourth longer than broad and less than as long as the rather tapering terminal joint. Thorax much narrower than the head, broadest through the pronotum, which is as broad as long and evenly convex above, with minute but distinct humeral angles. Pleurae rather fiat. Mesonotum sloping to a feeble constriction in front of the epinotum, the latter a little longer than broad, its base marginate on the sides and passing into the subequal declivity through a blunt angle. Spines laterally 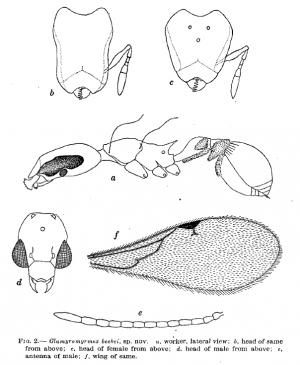 compressed, straight and acute, as far apart at their bases as long, directed backward and upward. Petiole fully twice as long as broad, pedunculate in front, with a low rounded node behind and with three spongiform appendages, one forming a narrow longitudinal band on the median ventral surface, the others a, triangular mass on each side of the node. Postpetiole transversely elliptical, distinctly broader than the petiole, with a large spongiform mass enveloping its sides and ventral surface. Gaster as large as the head, elliptical, with straight basal border and a small fungiform mass on the anteroventral surface. Legs rather

Smooth and shining; mandibles and head covered with minute, sparse, piligerous punctures, the lateral borders of the head above longitudinally striate. Gula, pleurae,. meso- and epinotum, and petiole opaque, densely and coarsely punctate-rugulose; gaster with a series of strong longitudinal rugae on the dorsal surface at the anterior margin.

Hairs and spongiform appendages sordid yellowish. Head with delicate hairs, which are short, sparse, and appressed on the dorsal surface but longer, denser and more oblique on the gula. Thorax with two pairs of very long, slender, flagelliform hairs, one on the humeral angles and one on the posterior corners of the pronotum. Petiole, postpetiole, and gaster with a few long, slender, erect hairs. Antennae and legs with short, subappressed hairs.

Head only slightly longer than broad, decidedly broader behind than in front, with straight sides, deeply concave posterior border and obliquely truncated posterior corners; in other respects, except for the larger eyes and the presence of ocelli, like the head of the worker. Thorax through the wing-insertions nearly as broad as the head, somewhat longer than high, narrowed in the pronotal region, with bluntly angular humeri. Mesonotum flattened above; scutellum convex, with acute, projecting posterior border. Epinotum abrupt and concave in profile, its spines and metasternal angles larger than in the worker, more translucent and compressed. Petiole, postpetiole, and gaster as in the worker.

Sculpture, pilosity, and color as in the worker, but the upper surface of the mesonotum and scutellum is opaque and coarsely longitudinally rugose, with reticulate-rugulose interrugal spaces, the mesopleurae are smooth and shining and the postpetiole is subopaque. and finely punctate above. The flagelliform hairs on the humeral angles are shorter and there are numerous erect, slender hairs on the mesonotum. Wings with uniformly brownish membranes, dark brown stigma and resin-colored veins.

Head longer than broad, with very short cheeks, feebly rounded postocular borders and rather straight, marginate occipital border. Mandibles very small, triangular, with feebly convex external borders and acute tips. Clypeus a little broader than long, subhexagonal, with the anterior border arcuately excised in the middle. Frontal carinae subparallel, reaching to the middle of the head, rather far apart. Antennae long, their scapes scarcely twice as long as broad and scarcely longer than the first funicular joint; all the funicular joints subcylindrical, longer than broad, the terminal joint longest. Thorax shaped much as in the female but broader than the head. Epinotal spines and metasternal angles shorter and blunter, not compressed and translucent. Petiole with a slightly more angular node in profile, postpetiole more transverse and less elliptical.

Opaque; with only the gaster, mesopleurae, and legs smooth, and shining. Head densely and uniformly punctate; thorax, petiole and postpetiole coarsely punctate-rugulose; sides of mesonotum above irregularly and longitudinally rugose. Gaster with short longitudinal rugae at the base.

Hairs pale yellowish, very sparse, slender and rather short and inconspicuous on the body. Flagelliform hairs on the thorax feebly developed. Hairs on the legs delicate, appressed.