A wet forest species that has been sampled many hundreds of times from leaf litter samples. Occurring in both Central and South America and known to be common in the better sampled region from southern Mexico to Costa Rica.

Longino (2006) - Intensive collecting at La Selva Biological Station and the Barva Transect has revealed a complex of five closely similar but consistently separable species related to Strumigenys subedentata. Strumigenys subedentata occurs throughout the Neotropics, usually in lowland wet to somewhat seasonal sites, in both mature and second growth forests. It is often collected in samples of litter and rotten wood from the forest floor. Strumigenys trieces occurs on the Atlantic slope of Central America from Nicaragua to Panama, from sea level to 1100 m elevation. It occurs most abundantly in mature wet forest where, like S. subedentata, it inhabits leaf litter and rotten wood on the forest floor. The three new species described here – Strumigenys oconitrilloae, Strumigenys cascanteae, and Strumigenys paniaguae – occur as a graded series of elevational specialists, with S. oconitrilloae occurring at La Selva and the 300 m site on the Barva Transect, S. cascanteae occurring at the 300 m site and at a 600 m site in the nearby Arenal National Park, and S. paniaguae occurring at the 500 m, 1100 m, and 1500 m sites on the Barva Transect. These three all show a tendency to be arboreal, nesting under bark flaps or epiphytes and rarely occurring in samples of litter and rotten wood from the forest floor. A sixth species in this complex, Strumigenys connectens (Kempf, 1958), occurs in Colombia and Ecuador.

2 Between the apicodorsal and apicoventral teeth of the apical fork are 2 - 3 minute intercalary denticles that arise from the space between the two teeth.

3 Preapical teeth or denticles are restricted to the distal third of the mandible, are 3 - 7 in number and may be conspicuous or minute and difficult to see.

4 Flagellate hairs are absent; hairs on the leading edge of the scape are coarse and broad , flattened or spoon-shaped.

Of the four species decipula lacks standing hairs anywhere on the dorsal surfaces of the head and alitrunk (abundant reclinate short spatulate ground-pilosity is present), and has a very broadly lobate short scape. In subedentata paired stout standing hairs are very conspicuous on the dorsal alitrunk, where 4 - 5 pairs are obvious, and at least the base of the first gastral sternite is strongly sculptured. Both connectens and trieces have a single, mesonotal, pair of standing hairs, have the first gastral sternite smooth basally, and lack a prominent lobe on the scape; the characters noted in the key will separate these two species.

Brown (1960) - Primarily a species of the leaf litter and upper soil layers in mesic tropical forest. Nests have been found on the underside of a small log buried in leaf litter, in a small pocket in the soil, and among rotting leaves and twigs. In life, the workers are active huntresses. E. O. Wilson (unpubl. notes) kept a colony from Veracruz alive and gave them a variety of small arthropods, among which they accepted as prey entomobryoid Collembola, while ignoring over two days small millipeds, Reticulitermes nymphs, a small isopod, and an undetermined soft-bodied mite. The colonies so far found have contained from about 20 to 90 workers and one or more queens. 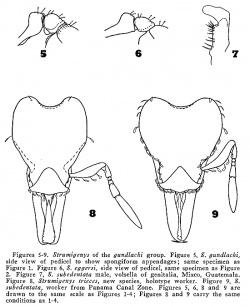 Bolton (2000) - TL 1.9-2.4, HL 0.48-0.57, HW 0.40-0.47, CI 82-87, ML 0.26-0.30, MI 49-54, SL 0.23-0.28, SI 55-60, PW 0.24-0.32, AL 0.47-0.60 (20 measured). Characters of gundlachi complex. Inner margins of mandibles strongly convex in full-face view, at full closure touching at about the midlength and diverging both proximally and distally. Apex of mandible with 2 minute intercalary denticles between apicodorsal and apicoventral teeth. Preapical denticles restricted to distal third or less of mandible, 4 – 7 (usually 5) in number and minute; distal most denticle the largest, located close to the apicodorsal tooth. Scape relatively slender, its anterior margin convex but not expanded forward into a large convex lobe; SL more than 4 times the maximum scape width. Eye moderate, with 5 - 7 ommatidia in the longest row. Metanotal groove distinct. Spongiform lobes of postpetiole small but obviously present; base of first gastral sternite usually without spongiform tissue. Apicoscrobal hair short and stout, remiform or flattened and expanded apically; a similar hair present at pronotal humerus. Dorsum of head with conspicuous curved spatulate ground-pilosity and with 2 pairs of longer, somewhat stouter, more erect hairs; one pair close to occipital margin, the other close to highest point of vertex. Promesonotal dorsum with coarse curved spatulate ground-pilosity and with 4 – 5 pairs of weakly curved stout standing hairs that are clavate or flattened and expanded apically. Entirety of head , ali trunk and waist segments reticulate-punctate; often a small clear patch on katepisternum. At least base of first gastral sternite reticulate to reticulate-punctate, frequently the sculpture more extensive. First gastral tergite reticulate, reticulate-punctate or even finely longitudinally costulate on the basal third to half; the sculpture sometimes extends to the apex of the sclerite.