Nothing is know about the biology of this species.

Kugler (1994) - germaini species group. WL 0.93-1.05mm. Clypeal apron with median notch. Metanotal groove weak to strong. Petiolar keel with single lamellate carina. Sting shaft apex has dorsal flange; lancets acute; both weak. Macrosculpture not effaced on side of head below eye. Promesonotal rugae sharp and narrow like those on head. Sides of both nodes distinctly macroareolate. Erect hairs on scapes. No decumbent hair on gaster; little if any on mesosoma dorsum.

Similar to Rogeria germaini but differs in size (lacertosa larger), clypeal shape, sculpture on side of head, and pilosity. Rogeria pellecta, also from southern Brazil, differs in petiole keel, sting and lancets, promesonotal sculpture, and pilosity.

Only from the type material collected from 100-200m elevation in southern Brazil.

Only known from workers.

Head. Mandibles smooth and shining with the usual 6 teeth on chewing border. Median lobe of clypeus truncate in front, laterally carinulate. Frontal area impressed. Frontal carinae broadly expanded, distance between their outer edges exceeding 1/3 of maximum head width. Scape finely and rather vestigially punctate, quite shining. Funicular segments IX and X not distinctly longer than broad. Compound eyes with about 20 facets. Front and cheeks with widely spaced, strong, posteriorly slightly diverging, longitudinal rugae; sculpture becoming coarsely reticulate-rugose on vertex, occiput and sides of head; on top of the vertex, the transverse, arched rugae predomina te as is usual for the species of the genus. Interrugal spaces finely and rather superficially reticulate-punctate, not quite shining.

Thorax. Scapular angle indistinct. Promesonotal disc longitudinally vermiculate-rugose, with occasional cross-connections among rugae. Mesoepinotal groove scarcely impressed. Basal face of epinotum somewhat longer than broad, with 7 transverse carinules, the first more prominent, the 2nd to 5th somewhat irregular, not all of them complete. Epinotal spines widely separated from each other at base, scarcely diverging and gently raised towards apex, not longer than their distance at base. Interrugal spaces on thorax sculptured as those on head; rather obsolete microsculputure on sides of thorax, which are predominantly horizontally rugose and quite shining. Metasternal lobes with superior and inferior corners angulate to subdentate. Declivous face of epinotum smooth and shining. So are also the legs.

Erect, fine and long hairs abundant and very dense on body, oblique on scapes and legs (very prominent). Gaster lacking decumbent hairs between the erect ones.

The measurements of the 8 paratypes vary as follows: head length 0.83-0.91 mm; head width 0.72-0.80 mm; thorax length 0.93-1.04 mm The compound eyes are variable in size and number of facets according to body length: larger specimens have about 20, smaller specimens only 15 facets. Upper angle of metasternal lobe quite variable. Transverse carinules on basal face of epinotum 6-7 in number when distinguishable; sometimes highly irregular and difficult to make out as regards carinules 2-5. 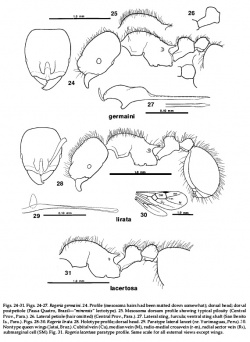 The following supplements Kempf (1963). All specimens at hand with 6 mandibular teeth decreasing in size basad, except for a large basal tooth. Eyes elliptical. Nuchal groove forms a notch in lateral view of head. Anterior edge of propodeum not marked by a transverse carina. Metapleural lobes low and broadly rounded or triangular with more narrowly rounded apex. Postpetiolar node from above like that of pellecta. Sting apparatus as inermis, but sting shaft and lancets are less sclerotized (easily twisted) and the lancets lack the barbule.

Head dorsum with erect-suberect hairs in addition to the typical decumbent pilosity.