A common and widespread Rogeria species. The types were collected in a residential area that was formerly mesquite-acacia savannah. Other specimens come from riparian woodland, palm-thorn forest, rain forest, pine-oak forest, cecropia forest, and cacao plantation. Most were taken in leaf litter on the ground. Some Belize specimens were under a termite nest; another in orchids.

Southern Texas to Costa Rica; from about 1,500m in parts of Chiapas and Costa Rica to sea level.

Kugler (1994) - This species becomes quite heterogeneous with this revision. Ants from almost every locality are different from the others in some conspicuous way. Specimens from Belize have the longest propodeal spines (PSI 0.24-0.28), more prominent metapleural lobes, weak or absent petiolar keel and thicker ridges in macrosculpture. The Texas specimens have similar habitus, but have somewhat shorter propodeal spines (PSI 0.21-0.23), less prominent metapleural lobes, more distinct petiolar keel and less thickened macrosculpture. A Tamaulipas specimen is similar to the Texas specimens, but has longer, distinctly inclined propodeal spines. Specimens from Yucatán, and Chiapas are the largest (WL 0.78-0.93mm), have a prominent clypeal body, somewhat longer scapes, small circular eye, strong nuchal groove, relatively shorter propodeal spines (PSI 0.19-0.22), and head macrosculpture with sharp ridges and unusually large areolae. Specimens from La Selva, Costa Rica are similar, but have normal clypeus and sculpture. Others from Costa Rica have shorter, more inclined propodeal spines (PSI 0.16-0.20), a more distinct petiolar node and keel, and subrectangular postpetiolar node. One specimen from Oaxaca is more like those from Belize; another is more like the San Jose specimens. With little material from most localities, I did not feel confident naming a new species for each variant, but as collections improve, I will not be surprised if this species undergoes fission.

At one time during the revision I also considered describing Rogeria cornuta, Rogeria innotabilis,Rogeria leptonana, and Rogeria alzatei as variants of creightoni . But now I believe they can delineated. Comparison of creightoni with leptonana is found in key couplet 40; comparisons with cornuta and alzatei, in their respective discussions. All known specimens of innotabilis fall within the geographic range of creightoni and the two species are sympatric in at least one locality. All specimens of creightoni differ from innotabilis in several ways: 1) erect hair on scapes and tibiae, 2) palpal formula 3,2, 3) clypeal apron with weak to distinct median notch, and 4) postpetiolar sternum not prominent. The regional variants differ in additional, but inconsistent ways. 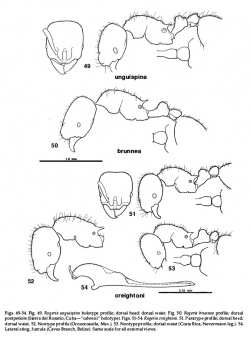 A single queen from Trinidad (N. A. Weber #129) is very much like the three Costa Rican and Colombian queens provisionally assigned to innotabilis in size, general habitus, triangular mandibles, convex clypeus, robust mesosoma (MHI 1.28), propodeal spine size and shape, and subrectangular postpetiolar node, but differs in having erect hair on scapes and tibiae, little or no keel on petiolar peduncle, undulate ventral profile of postpetiole, and longitudinally oriented sculpture on the posterior head. On the basis of the pilosity, I provisionally assign the Trinidad queen to creightoni , but because of its great similarity in other respects to the innotabilis-like queens, and because neither set of queens is from an area where workers of creightoni or innotabilis have been collected, I do not feel confident of these assignments.