Specimens come from 0m to 610m in Panama, 0m to 240m in Colombia and Venezuela. Taken from berlesate of leaf mold and rotten wood, under stones in an oak-juniper woodland at 1783-1814m in Arizona and from canopy fogging samples in Costa Rica (Longino).

Rogeria foreli is closely related to Rogeria bruchi, which at present is known only from Argentina and Paraguay, much farther south than known foreli specimens.

Mackay and Mackay (2002) - In the northernmost part of its range, Rogeria foreli is found in rocky areas within the Chihuahuan Desert, extending into juniper woodland at 1800m.

DaRocha et al. (2015) studied the diversity of ants found in bromeliads of a single large tree of Erythrina, a common cocoa shade tree, at an agricultural research center in Ilhéus, Brazil. Forty-seven species of ants were found in 36 of 52 the bromeliads examined. Bromeliads with suspended soil and those that were larger had higher ant diversity. Rogeria foreli was found in a single bromeliad and was associated with the suspended soil and litter of the plant.

Kugler (1994) - Side by side comparison of the types of foreli and gaigei revealed that the only difference between them is size; but the gaigei type is well within the size variation of foreli specimens. Although the types of huachucana come from Arizona, far from other known foreli specimens, and were collected in an unusual habitat, they differ from the foreli holotype only in having: 1) 7-8 facets in the eyes (vs. 12), and 2) a weak metanotal groove (vs. none). Since eye size and metanotal groove development vary continuously and not concordantly in foreli specimens from Central and South America, and since equally small eyes and even more distinct metanotal grooves are present in those specimens, I am unable to distinguish the huachucana specimens as a distinct species at this time. 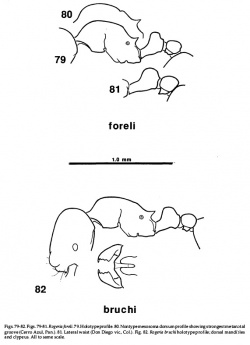 While working in Northern Colombia for two years I regularly collected two kinds of foreli, which I could distinguish at a glance by the shapes of their postpetiolar sterna. Specimens from Barro Colorado Island, Panama, and Trinidad also have the same two types of sterna. In Colombia and Panama, both morphs have been taken from the same locality, but it is not known whether the two morphs come from different colonies or not. I considered calling the specimens with a more prominent, shelf-like postpetiolar sternum new species, but the difference is sometimes subtle and individuals difficult to assign. Without corroboration from another character, I decided against erecting a new species at this time.

Color yellow with a slightly brownish gaster to chestnut-brown with brownish-yellow or light brown appendages.

Differing from the workers in the normal queen attributes and in the following. One specimen with 3 teeth and 5 den tides; the others with the same variation as in the workers. Posterior outline of head with weak median concavity in some. Parapsidal furrows are barely discernable. Mesoscutum in all specimens longitudinally rugulose; mesoscutellum vaguely rugose to areolaterugose.