The nest of Pogonomyrmex californicus is surmounted by a circular or semicircular crater of loose sand bearing a single entrance.

Cole (1968) - Identification of workers of the "typical" Pogonomyrmex californicus has apparently presented no problems. Such workers are those which comprise that part of the over-all population chiefly in coastal California and Baja California. They are of comparatively small stature and bear coarse cephalic and thoracic rugae, the interspaces of which are strongly shining and faintly or not at all punctate. The petiolar node is short and rather broad, and it has a prominent nipple and a steep anterior declivity. The body is a concolorous, rather light, ferrugineous red.

With eastward progression in the range of californicus, however, the following clinal transitions and tendencies can be noted in the worker caste: (1) decrease in number, spacing, and coarseness of cephalic rugae; (2) addition of interrugal punctures on the head and pronotal humeri; (3) decrease in gradient of the anterior declivity of the petiolar node; (4) development of a more spatulate petiolar node, the sides becoming more convex; (5) reduction of the petiolar nipple; (6) tendency toward the development of a ventral petiolar peduncular process; (7) lengthening of both petiolar and postpetiolar nodes; (8) reduction in size of the postpetiolar ventral process; (9) increase in over-all size; and (10) infuscation of the gaster in some or all of a series, from lateral spotting to concolorous black or brown.

Nearly all arid environments ranging from weedy bajadas to grasslands on to creosotebush scrub.

Can be locally abundant; common in northern Mexico.

Typically nests in sandy soils where it has small mounds (20 cm diameter). This species does not clear vegetation surrounding the nest. Nest populations are about 2000 individuals, with a nest depth of 2 meters. It is primarily a seed harvester. Foragers are often active during relatively hot times of the day, during which the ants run stiff-legged with the gaster elevated, apparently in an attempt to distance themselves from the hot surface. They can often be seen mounting small pebbles and stones and waving their legs, apparently attempting to lower their body temperatures. It is very pugnacious and is one of the two ants in New Mexico with the most painful sting (the other species is Pogonomyrmex maricopa). The sting is barbed and becomes detached to remain in the flesh, as occurs in the honeybee. It is possible to watch the sting apparatus apparently pump venom into one’s tissues, especially through a microscope. Reproductives are found in nests from May to July. Flights occur from May to July and a single nest may participate in several nuptial flights. Horned lizards (Phrynosoma spp.) are major predators. (Mackay and Mackay 2002)

The workers are assiduous harvesters; they forage all day, except during the hottest hours. Seeds are harvested in great numbers, notably those of Phacelia spp., Aristida sp., and Sarcobatus vermiculatus; the mounds are often surrounded by the bracts of these and other seeds (Cole, 1932b: 115).

In Nevada, Wheeler and Wheeler (1986): This red or red and black harvester is one of the common ants of the Mojave and Sonoran deserts. We have found chambers at a depth of 2 l/2 cm under an area of 30-60 cm2; these usually contained seeds or chaff. In a flourishing colony we found brood, seeds, and sexual forms in the same chamber, with the brood lying on the seeds. We also found stored seeds at a depth of 7 l/2 cm. The workers ran rapidly and erratically, with frequent stops and changes of direction for no apparent reason. Often the gaster was conspicuously elevated; this doubtless had a cooling function. The nest was closed with sand or pebbles at night and in the heat of the day. We have a total of 261 records from 175 localities; 500-6,300 ft.: 28 from the Hot Desert, 83 from the Cool Desert (45 from Sarcobatus Subclimax, 2 from cottonwood groves, 17 from disturbed areas, and 13 from sand dunes). In Nevada P. califomicus is common and widely distributed in the southern and western portions of the state. We have no records from a zone 40 mi. wide along the entire northern border and no records from Elko, White Pine, and Lander counties. We found the following myrmecophilous beetles in the nests: Araeoschizus armatus; Araeoschisuz armatus and Notibus nr puncticollis LeC; Notibus puberulus LeC; Notibus substriatus Casey; Papusus sp. probably macer Casey.

Mandible as illustrated in Pl. III, Fig. 9. Base of antennal scape as shown in Pl. IV. Fig. 9; contour of thorax, petiole, and postpetiole, in lateral view, as in Pl. VI, Fig. 8.

Cephalic sculpture varying from a few, coarse, widely spaced rugae with or without sparse interrugal punctures to notably more abundant, more closely spaced rugae and dense, fine, interrugal punctures. Interrugal spaces of head and thorax distinctly shining. Interrugal spaces of thorax, except sides of epinotum, with or without punctures; those of sides of epinotum without punctures. Epinotum unarmed, the angle between the epinotal base and declivity generally smooth and broadly rounded but sometimes rather sharp. Contour of petiolar and postpetiolar nodes, in dorsal view, as shown in Pl. VII, Figs. 12, 13. Petiolar and postpetiolar nodes with or without irregular rugae or striae.

With the usual female characters and those of the worker, except interrugal spaces of head very smooth and shining and without any definite interrugal sculpture.

Head with a distinct, though sometimes weak, median longitudinal carinula across the occiput and vertex; mandible as shown in Pl. VIII, Fig. 8, blade moderately bent, bearing 2 to 4 (usually 2 or 3) teeth on a narrow, transverse, generally somewhat constricted, apical margin. Anterior declivity of pronotum, in lateral view, meeting the short pronotal collar at an abrupt angle. Epinotum without armature. Petiolar node, viewed from above, approximately as broad as long, the sides broadly convex. Sculpture of body not definitive. Paramere as shown in Pl. X, Fig. 7 and Pl. XI, Fig 7. 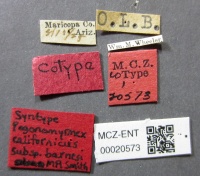