Stefan Cover, whose intensive collecting in the southwestern United States has brought him into frequent contact with sciophila, reports as follows (personal communication): “This ant is not commonly collected, in large part because its nests are inconspicuous. Entrances to soil nests are cryptic and they are often located at or near the bases of desert shrubs. They can be deep also: one nest excavated in SE Arizona (elev. 1300 m) in grazed desert penetrated 1.2 m into caliche nearly as hard as a Manhattan sidewalk. Colonies are monogynous and can consist of several hundred ants. P. sciophila appears to be omnivorous; no seeds have been found in many nests excavated in southern Arizona.” (Wilson 2003)

The major of this species is tiny (total length slightly more than 2 mm, head length 1.2 mm), with the anterior half of the head longitudinally striate, the posterior half of the head and the tops of the posterior lateral lobes smooth and shining, much of the dorsum of the pronotum is smooth and glossy, the sides of the mesosoma are finely punctate, the humeral angles are poorly developed, the lateral connules are not developed. The scapes of the minor workers extend more than one funicular segment past the posterior lateral corners, the head is glossy and shining, the mesosoma is completely and densely punctate, the dorsum of the pronotum may shine in the central region, but is still punctate. (Mackay and Mackay 2002)

Central Texas to deserts of southern Arizona and California and southward into Chihuahua, Mexico, at 100–1800 m. (Wilson 2003)

All the colonies of sciophila which Wheeler took came from shady areas near streams. This has been true of some of the colonies taken by the senior author, but this species is capable of utilizing fully exposed nest sites well removed from any source of water. (Creighton and Gregg 1955)

Small colonies of this species nest under stones. Foragers were attracted to peanut butter baits. Wheeler (1908) suggested that this species was entomophagous (eats insects). (Mackay and Mackay 2002)

This species is a host for the eucharitid wasp Orasema wheeleri (a parasite) (Universal Chalcidoidea Database) (primary host).

From Wilson (2003): An unusual species placed in the fallax group but with other traits in body form, including head form and antenna length that are intermediate to the pilifera group.

Minor: gaster, clypeus, and frontal triangle smooth and shiny, and all the rest of the body foveolate and opaque; pilosity along dorsal profile of mesosoma mostly comprising evenly spaced pairs of setae.

The species exhibits considerable variation in body form and sculpturing, especially in the major caste, as noted by Creighton and Gregg (1955). The number of hypostomal teeth of the major is 3 or 5.

COLOR Major: body and posterior three-fourths of the head a rich reddish brown, with the gaster a shade darker, and the anterior fourth of the head brownish yellow. 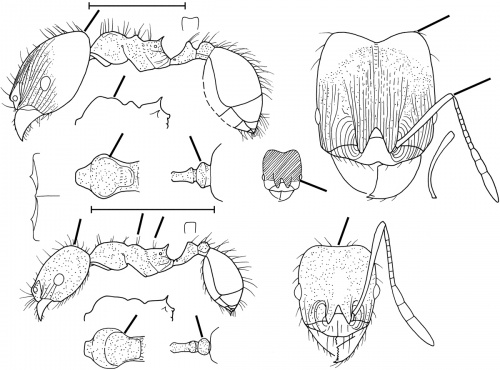 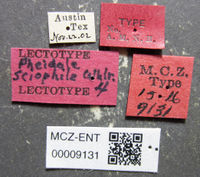