This species is found on plateaus and among foothills at the base of mountains across a wide elevational range, from 1100 to 2100 m, with an apparent preference for the lower end (Creighton 1950: 168). According to Stefan Cover (personal communication), it “forms enormous colonies surmounted by sloppy craters or under rocks, chiefly on open, rocky slopes. Seeds are harvested in large quantities, but the ants are active predators as well. Mature colonies have well-developed trunk-trail systems. Minors and medias forage, but large majors and supermajors are seldom seen outside the nests. The ants are aggressive, and all size classes actively defend the nest.” (Wilson 2003)

This is a large, polymorphic species, in which the propodeal spines of both the major and minor are unusually long and sharp. The gaster is rounded anteriorly, where it connects to the postpetiole. The entire dorsum of the head is covered with striae, which diverge towards the posterior lateral lobes. These striae may form concentric whorls on the posterior lateral lobes of the largest workers. The apex of the petiole is relatively sharp, and may be bidentate in the largest workers. The lateral connules are well developed. (Mackay and Mackay 2002)

Upland open and grassy slopes in mountain foothills. Nests are found on plateaus or in foothills at the bases of mountains, from 1100 - 2200 meters. (Mackay and Mackay 2002)

This species nests in the soil, and nests can be very large. They are not commonly collected in the United States, and are much more common in México. The majors have such heavy heads, that they become “stuck” in a position with the heads down and the remainder of the body and legs kicking in the air! (Mackay and Mackay 2002)

This species is one of a small number of Pheidole species that has three worker castes.

Gordon et al. (2017) examined behavioral, morphological and neurological differences among the three worker castes in a large (~30,000 workers) laboratory colony. They found: differentiation in behavior and brain anatomy between minor workers and soldier groups but not between soldiers and supersoldiers in P. rhea. Although three worker groups can be distinguished by body size and head allometry (Huang and Wheeler 2011), the lack of further distinction between soldier and supersoldier groups in behavior and neuroanatomy, as well as body shape, does not provide evidence of selection for discrete, size-related social roles and correlated divergence in neural phenotypes in this species. The extensive behavioral repertoire overlap between soldiers and supersoldiers suggests that workers in these size classes are not performing qualitatively different tasks but may instead vary in the frequency, efficacy, or efficiency with which acts are performed. If soldier and supersoldier workers perform qualitatively similar tasks, we expect their sensory, motor, and cognitive demands to be similar, resulting in conserved brain phenotypes.

They speculated that the two larger worker castes are specialized for handling and processing different sized seeds. These putative behavioral differences were not addressed in the design of their laboratory colony observations.

Additional images can be found here.

From Wilson (2003): DIAGNOSIS A giant species, reddish to dark brown, tentatively placed in the pilifera group because of the bidentate hypostoma and presence of a supermajor, but with overall appearance similar to some species of the fallax group. Trimorphic, with major, supermajor, and minor castes, as illustrated. Also distinguished as follows.

Major: head completely covered everywhere except on frontal triangle by dense longitudinal carinulae; promesonotum smoothly convex in both side and dorsal-oblique views; propodeal spines very long; posterior face of propodeum descends vertically; postpetiole diamond-shaped from above. Supermajor: propodeum descends vertically; postpetiole diamond-shaped from above; cephalic sculpturing as in major, except that the carinulae of the dorsal face behind the level of the eye curve inward toward the cephalic midline.

COLOR Major and minor: body light reddish brown, except for the gaster, which is a slightly contrasting dark reddish brown. 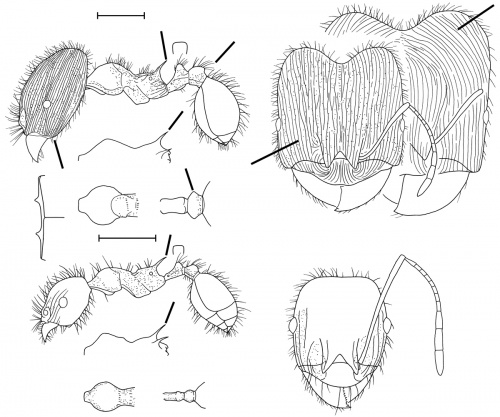