Fischer & Fisher (2013): Pheidole fervens, described from Singapore, is a widespread invasive species and could be native to the Oriental or the Oceanic region (Eguchi 2004, Wilson & Taylor 1967). It usually nests in soil or under stones and usually prefers disturbed habitats (Eguchi 2004). In Japan it is found nesting under stones in open land grading to forest margins (Ogata, 1981). On Fiji it was collected in elevations between 1–800 m and tended to inhabit several different habitats from forest edge and mangrove forest to disturbed and undisturbed rainforest. On Mauritius, which seems to be its western distribution limit, this ant was found in the leaf litter of lowland rainforest (200 m elevation). As with most other introduced ants, such as Pheidole indica, it is unclear what effect, if any, P. fervens might have on the rest of the local ant fauna. Considering that the ecosystems of the Mauritius islands have been severely altered and disturbed since the arrival of human settlers several hundred years ago, and native species must also contend with the invasions of introduced organisms (Fisher 2005, Ward 1990), parts of the original ant fauna might have been marginalized or driven to extinction long ago. We speculate that the scarcity of P. fervens specimens in Mauritius ant collections and its presence in the rainforest means that this ant has not yet become an invasive and dominant aggressor toward other ant species. Nevertheless, efforts to further investigate the presence and activity of introduced Pheidole species are worthwhile, especially in the few remaining undisturbed habitats.

Pashaei Rad et al. (2018) found this species in Iran on the ground in moist to moderate rainfall areas.

Fischer and Fisher (2013) - The workers of P. fervens can be easily confused with those of Pheidole indica. Morphologically the minor workers are best separated by coarse, mostly suberect scape pilosity, impressed metanotal groove, relatively smaller eyes and shorter spines (EI 21–25, PSLI 10–13) in P. fervens versus decumbent to subdecumbent scape pilosity with longer suberect hairs along outer edge, inconspicuous metanotal groove in profile, and larger eyes and longer spines (EI 25–30, PSLI 14–19) in P. indica. The major workers of P. fervens are recognizable by having longer scapes (SI 61–71 versus SI 49–62) and a narrower postpetiole in dorsal view than P. indica (DPpI 133–150 and PpWI 172–195 versus DPpI 146–235 and PpWI 190–247). In P. fervens, the pilosity in the face and on the metatibia is coarser and at least partly suberect, and the punctures on the sides of the face are stronger than the thinner and more decumbent to subdecumbent pilosity and superficial punctures on the sides of the face in P. indica.

Eguchi (2008) - This medium-sized species with general habitus is similar to Pheidole binghamii, Pheidole elongicephala, Pheidole indica, Pheidole ochracea and Pheidole plagiaria among Indo-Chinese species. P. fervens is well separated from P. indica which has the following characteristics: eye relatively large (maximal diameter of eye much longer than antennal segment X in the major, and as long as or a little longer than X in the minor); in the major propodeal spine is relatively broadly based (see Eguchi 2004).

Posterior margin of head in full-face view is more deeply and narrowly concave in the major of P. binghamii, P. elongicephala and P. ochracea than in that of P. fervens, and sculpture on dorsum of vertexal lobe is usually stronger in the major of the former three.

The major of P. fervens is separated from that of Pheidole plagiaria which has the following characteristics: posterior margin of head in full-face view deeply concave; the rugulae running almost transversely along posterior margin of vertexal lobe.

Habitat preference, body size and coloration are similar to Pheidole indica, Pheidole noda and Pheidole megacephala. In fact, these species are sometimes closely sympatric in the Ryukyus. P. fervens can be distinguished by its lighter body color, smaller eyes, the relatively fine reticulation on the heads of its soldiers, the shape of the propodeal spines and the proportions of its postpetiole (Japanese Ant Image Database).

Two syntype major workers and one syntype minor worker (on separate cards) in Oxford University Museum of Natural History. Each major worker labelled “Menado” and with a Smith det. label “Solenopsis pungens Smith.” The minor worker with “Men. 18” and an attached note explaining that Pheidole pungens was placed in Solenopsis by an oversight. Each of the three cards has the letter “c” in the lower left corner. 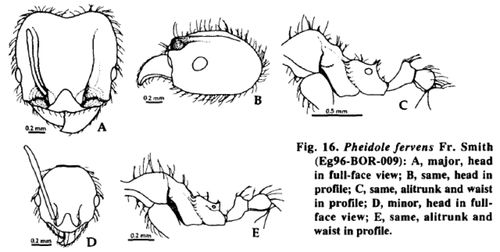 Head in lateral view not or hardly impressed on vertex; posterior concavity of head in full-face view usually shallow; frons and anterior part of vertex rugose longitudinally; posterior part of vertex and dorsal face of vertexal lobe rugoso-reticulate, with interspaces weakly punctured; frontal carina conspicuous; antennal scrobe inconspicuous or shallowly impressed; clypeus without a median longitudinal carina; median and submedian processes of hypostoma absent or present but inconspicuous; lateral processes conspicuous; antenna with a 3-segmented club; maximal diameter of eye almost as long as or shorter than antennal segment X. Promesonotal dome in dorsal view largely smooth, or sparsely sculptured with weak transverse rugulae, in lateral view with a low to conspicuous mound on its posterior slope; humerus not produced; the dome much narrower at the humeri than at the bottom; mesopleuron, metapleuron and lateral face of propodeum well punctured, sometimes overlain with weak rugulae; propodeal spine narrowly based, usually slightly curved apically. Petiole longer than postpetiole (excluding helcium); postpetiole not massive. First gastral tergite smooth and shining entirely, or sometimes shagreened around its articulation with postpetiole.