Nothing is known about the biology of crozieri.

Known from the type locality, and from two other series taken in Lima, Peru. (Wilson 2003)

A light brown member of the diligens group, closest to Pheidole williamsi of the Galápagos Islands but also with some similarities to Pheidole vafella, as well as Pheidole rufipilis and the mostly South American species listed with rufipilis (q.v.), differing from williamsi as follows.

Minor: petiolar node in side view high, and its dorsal border nearly flat in rear view.

COLOR Major: body and most of head light brown; appendages and anterior third of head a slightly contrasting yellowish brown.

Minor: body and most of head light brown; gena and appendages yellowish brown.

Specimens from Lima in the Museum of Comparative Zoology are somewhat darker. 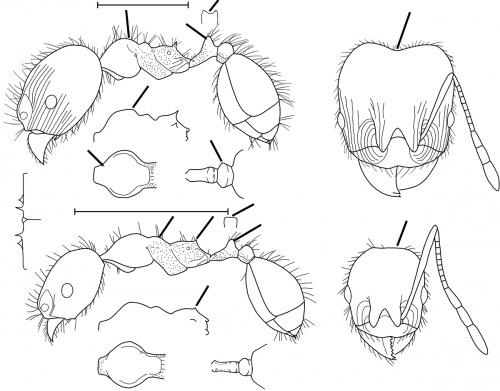