Roy Snelling (in Gregg 1969) reports that P. clementensis is one of the commonest ants on San Clemente Island (especially on the seaward side), where it nests under stones. The minor workers are nocturnal, starting to forage shortly before sundown. They are evidently mostly or entirely granivorous, preferring the seeds of Cassus cretica but also gathering grass seeds and those of a small legume, probably a species of Lotus. The majors form an unusually high percentage of the worker population. (Wilson 2003)

See also the description in the nomenclature section.

From Wilson (2003): DIAGNOSIS A member of the “pilifera complex” of the larger pilifera group; for a characterization of the complex, see under Pheidole pilifera. P. clementensis is distinguished within the complex by the following combination of traits.

COLOR Major: head dark yellow, with at least occasionally a pair of medium brown spots on vertex, falling on either side of the cephalic midline; rest of body light yellowish brown. 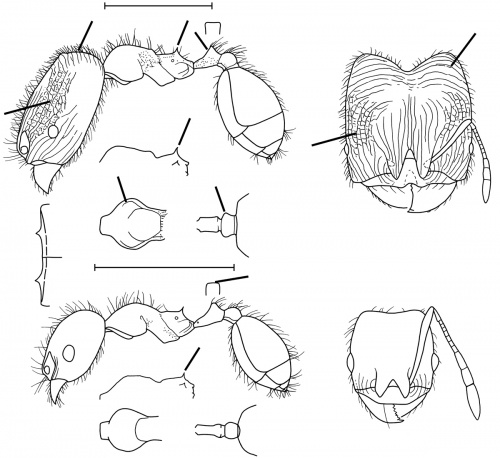 Referring to the type locality. (Wilson 2003)