Pheidole alfaroi occurs on the ground, either under second growth forest or in cloud forest pastures, nesting under dead wood.

In the Project ALAS quantitative sampling along the Barva Transect in Costa Rica, intensive sampling was carried out at 1100m, 1500m, and 2000m elevation. The 1100m site was all dense primary forest. The 1500m site was an ecotone between primary forest and actively maintained cow pastures. The 2000m site was a mosaic of primary forest and regenerating second growth vegetation. Ants were collected using Winkler samples of sifted litter from the forest floor, flight intercept traps, and Malaise traps. At the 1100m site, P. alfaroi was moderately abundant in all sample types, while P. innupta was rare, occurring in only one of 20 Malaise traps. At the 1500m site P. alfaroi was one of the most abundant ants, occurring in all sample types and in many hand collections of nests under dead wood, and P. innupta was absent. At the 2000m site, P. innupta workers were collected occasionally in Malaise traps and flight intercept traps, but never in Winkler samples from the forest floor litter. Pheidole alfaroi was absent. These observations suggest that P. innupta and P. alfaroi are ecological replacements, with P. innupta being arboreal and adapted to the coldest conditions and highest elevations, while P. alfaroi is ground-nesting and adapted to slightly warmer, lower elevation, and/or more disturbed habitats. This is an interesting species pair to observe with respect to climate change.

This species is a host for the eucharitid wasp Orasema wayqecha (a parasite) (Universal Chalcidoidea Database) (primary host).

From Wilson (2003): A member of the diligens group closest to the Costa Rican Pheidole diana but distinguished from it and other members of the group by the following combination of traits.

Minor: circular carinulae around antennal fossae reach all the way to the eye and are succeeded by other circular, “wraparound” carinulae that continue to the sides of the head; most of promesonotal dorsum and all of propodeum carinulate.

The types of alfaroi and Pheidole innupta are virtually identical except for color (see below) and possibly a small difference in the propodeal angle (see illustration), and I have interpreted them as no more than color forms of the same species in the upland area around La Palma and Vara Blanca. Longino (1997). considers them sibling species, noting that innupta is “always black and nests under epiphytes,” whereas the types of alfaroi are light colored and were found in rotting wood. If subsequent field research upholds these differences, Longino’s interpretation is probably correct, and the nomenclature can be easily adjusted. Series from upland Panama and Colombia placed by me in alfaroi are intermediate in color: light to medium reddish brown. 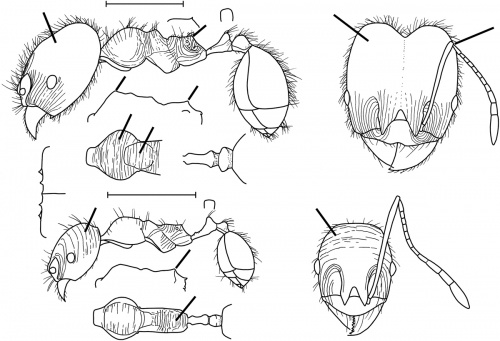