This is a lineage of subterranean ants from Central and South America. Its members had been extremely rarely encountered before collecting methods targeting soil-dwelling ants were popularized: 17 out of the 19 currently known species were described after 1998. (Borowiec 2016)

Borowiec (2016) - Worker The workers of Leptanilloides are rather variable but can be distinguished from all other dorylines by a combination of promesonotal suture variously developed but often conspicuous, propodeal spiracles positioned low, lack of metanotal groove, absence of propodeal lobes, and small and unarmed pygidium. The positioning of the propodeal spiracle may be rather high on the sclerite in some species and so these could conceivably be mistaken for small Neivamyrmex. The latter, however, can be distinguished by a complete lack of a promesonotal suture in dorsal view and abdominal segment IV much larger than the succeeding segment V, with no apparent constrictions between abdominal segments IV, V, and VI. Although some larger Leptanilloides species can have an inconspicuous promesonotal suture, those will have visible constrictions on the gaster and abdominal segment IV and that segment is never much larger than succeeding gastral segments.

Male The males of Leptanilloides are distinct in their extreme reduction of tegulae. The wing venation is reduced and unusual among dorylines because of the combination of costal cell (C) present in fore wing and discal cell always being open. The males of Leptanilloides also lack conspicuously bispinose abdominal sternite IX (subgenital plate) characteristic of almost all other male dorylines.

Delsinne et al. (2015) provide the most recent key to species of Leptanilloides excluding Asphinctanilloides (see the link just below), but the species that were placed in the latter can still be identified using Brandão et al. (1999a): Key to Asphinctanilloides workers.

Borowiec (2016) - Leptanilloides is a genus found throughout Central America, from Chiapas, Mexico to Panama, and from scattered, mostly high-elevation records from Bolivia, Colombia, Ecuador, and Venezuela. It is also present in the Amazon Basin and one species has been described from the Atlantic forest habitat of São Paulo, Brazil. A recent collection from western Texas (MacGown et al. 2015) is a remarkable range extension for this lineage.

Based on reported specimen data, members of this genus group have been collected mostly in cloud forests (Borowiec & Longino, 2011; Brandão et al. 1999; Donoso et al. 2006; Longino 2003, Silva et al. 2013). Leptanilloides chihuahuaensis was collected in semiarid grassland habitat in the southern foothills of the Davis Mountains in western Texas, approximately 2500 km north of the next closest collection of the genus-group in Chiapas, Mexico.

Small hypogaeic blind ant-predators with subterranean legionary habits. Collecting techniques have undersampled ants that live an underground existence and this helps explain how little is known about these ants. Museums hold few Leptanilloides specimens. Label data shows many have been collected from cloud forests.

Anecdotal observations suggest these ants ("Leptanilloidinae" species) behave as army-ant like predators. These ants are likely to be largely subterranean, occasionally coming to the ground surface under debri (rocks, downed wood, etc.) while foraging or to allow mature sexuals (either males only or perhaps males and females) to leave their natal nest. Group predation, frequent colony migrations and synchronized brood cycles may also be part of their life history.

Borowiec (2016) - Leptanilloides nomadus was observed foraging at night in partly subterranean, partly exposed, columns but the ants did not carry any prey (Donoso et al. 2006). In Leptanilloides nubecula the colonies are apparently polygynous, with subdichthadiigyne queens and intercastes present (Donoso et al. 2006), but a complete colony of Leptanilloides erinys contained only single subdichthadiiform queen (Borowiec and Longino 2011). Brood apparently develops in synchrony, as all nest collections so far contain larvae of uniform size (Brandão et al. 1999a,b, Donoso et al. 2006, Borowiec and Longino 2011). Brandão et al. (1999b) summarized the scant information available on species then classified in Asphinctanilloides (=Leptanilloides). They report workers of Leptanilloides anae moving in columns similar to that of army ants, preying on an unidentified, dismembered arthropod under cow dung. This would suggest that this species may not be a specialized predator of other ants, like most dorylines, although it is clear that more observations are needed. As evidence for hypogaeic habits Brandão et al. (1999b) note that where intensive surveys of leaf litter ants have been carried out specimens have not been collected by that method but only from soil samples. Specimens have also been extracted from stomachs of subterranean amphisbaenians, giving further evidence for the underground lifestyle.

Brandão et al. (1999) - Leptanilloides is exclusively Neotropical, recorded from the Andean foothills at 440 m in Bolivia and in higher altitudes (> 3200 m and up) in Colombia and Ecuador. The biology is completely unknown, except some indication of army ant life style by the study of Leptanilloides legionarius larvae. The strong girdling constrictions separating the three visible gastral segments is unique among leptanilloidine ants and a similar situation is only found in the cerapachyine Sphinctomyrmex, which has the armed pygidium not reduced. Although the larvae we have in hand are not well preserved, we found nothing similar to the larval haemolymph structure described by Masuko (1989) in Leptanilla japonica.

Donoso et al. (2006) - The army ant syndrome is defined as a combination of three discrete features: nomadism, obligate group-predation and queen dichthadiigyny. Brandão, Silva et al. (1999) provided indirect evidence that army-ant like behavior occurs in the subfamily Leptanilloidinae (=Dorylinae). First, they observed synchrony in larva production, which suggests nomadism. Second, two observations suggested group predatory behavior: 1) direct observation of group-predation by an Leptanilloides anae colony on an arthropod and 2) presence on larvae of mandibles with slender, sharp pointed teeth that facilitate being carried by workers. One of the worker paratypes of Leptanilloides legionarius Brandão et al. was preserved holding a larva in the fashion typical of army ants, with the larva slung ventrally under the body of the worker (Figure 6 in Brandão, Diniz et al. 1999), and our field observations confirm this behavior in Leptanilloides nomadus and Leptanilloides nubecula. Our observations provide further evidence for synchrony in brood production, as noted by the presence of numerous (>100) larvae in a single growth stage during collections of L. nomadus and L. nubecula. Also, our observations demonstrate for Leptanilloides subterranean habits, trail-following behavior, and nocturnal activity.

The discovery of the L. nubecula gyne with a subdichtadiigyne habitus brings new data to the discussion of army ant origins. The leptanilloidine queen differs from true army ants in at least two respects: the gaster is not fully physogastric (maybe due to the relatively small number of workers in a normal leptanilloidine colony, or to a particular colony stage when collected), and the presence of eyes. However, in common with true army ants, leptanilloidine gynes are apterous and have an enlarged postpetiole and falcate mandibles. These characteristics suggest obligate fission as the reproductive strategy for Leptanilloides (see discussion in Gotwald 1995; Peeters & Ito 2001). Workers also show variable expression of typical army ant characters. Unlike true army ants, the colonies are not extraordinarily large, and there is no extreme polymorphism like some of the army ants. The Leptanilloidinae suggest a scenario for what the early stages of army ant evolution might have been.

The queen polymorphism (one true gyne plus several ergatogynes) found in L. nubecula is not new in the dorylomorphs (see Peeters & Ito 2001). Polygyny was reported for Neivamyrmex carolinensis (Rettenmeyer & Watkins 1978). In this species, polygyny was presumed to be correlated with special ecological limitations imposed by the tough environment in which the ants live. They occur at the northern limit of the range of army ants, and there may be a high rate of gyne death due to cold winters (Gotwald 1995). The cold conditions of the high Andean cloud forest may similarly favor polygyny in Leptanilloides.

The new species L. nomadus and L. nubecula share strikingly similar character states with Leptanilloides mckennae and Leptanilloides legionarius with respect to external morphology. Shared characters include: 1) high reduction or lack of genal teeth, 2) petiolar form intermediate between Asphinctanilloides and Leptanilloides, 3) postpetiole smaller than petiole, 4) postpetiolar spiracle shifted backwards on anteromedian side of tergite, and 5) blunt flange over metapleural gland opening. These characters blur the distinction between Leptanilloides and Asphinctanilloides, an observation previously noted by Longino (2003) and Ward (2006). It is noteworthy that the males of the two species for which males are known differ greatly in mandible shape. The mandible of L. nubecula males are falcate while those of L. mckennae are subtriangular. The presence of sickle-shaped mandibles in L. nubecula males provides additional evidence that at least some Leptanilloides show trends toward stereotypical army ant morphology (see Ward 2006).

The discovery of three Leptanilloides species living in sympatry provides evidence of considerably more ecological diversity than was previously thought. The different Leptanilloides species may well be occupying distinct subterranean ecological niches. True army ants usually also occur as diverse communities of sympatric species (Gotwald 1995), although in that group as well little is known about how the different species partition local resources It is unknown whether these sympatric Leptanilloides speciated in sympatry or whether they co-occur as a result of secondary contact. In any case, the Otonga reserve and other Andean cloud forests are of extremely high importance for the study and conservation of Leptanilloides ants, a significance noted more generally by Myers et al. (2000) and documented for mammals (Jarrin 2001) and vascular plants (Jaramillo 2001).

The phylogenetic position of Leptanilloides within Dorylinae was difficult to ascertain with Sanger sequencing data (Brady et al. 2014) but genomic data suggest that it forms a clade with Sphinctomyrmex and New World army ants. Several species have been included in morphology-based and molecular phylogenies (Brandão et al. 1999a, Ward 2007, Ward and Brady 2009, Delsinne et al. 2015, MacGown et al. 2015, Borowiec, in prep.) but the availability of fresh material precludes a comprehensive analysis. 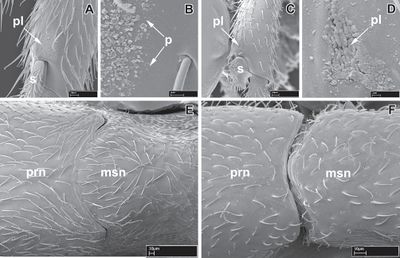 Borowiec (2016) - The queens of Leptanilloides collected so far have been ‘subdichthadiiform’, or wingless ergatoids with eyes and hypertrophied gaster, including abdominal segment III. The gynes possess eyes but no ocelli. See description of Leptanilloides erinys gyne; Donoso et al. (2006) also reported blind intercastes in addition to a subdichthadiigyne in Leptanilloides nubecula. 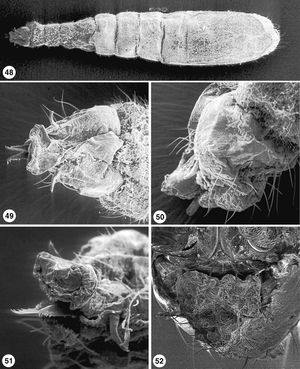