The specimens of L. chihuahuaensis were collected in Townes style Malaise traps (Townes 1972) at two locations within Davis Mountains State Park. The first location was on the south (north-facing) slope of Keesey Canyon adjacent to a hillside drainage area. The vegetation at this site was dominated by short grasses but also included scattered forbs and a few low trees and shrubs. The noncalcareous soil, of igneous origin, was shallow, well drained, and extremely rocky (Turner 1977). The second location was in Limpia Canyon on the dry floodplain of the intermittent Limpia Creek. The soils here were similar to the first site, but the vegetation differed in having taller grasses and forbs, with grasses being less dominant, and with forbs, shrubs, and small trees being more numerous. Many rocky, unvegetated areas were also scattered through this habitat. The Malaise trap at this site was located only 20 m from the north (south-facing) slope of Limpia Canyon, which had similar habitat to the first site, so it is possible that the ants in this trap originated from the canyon slope rather than the floodplain. (MacGown 2015)

Known from males only.

Despite the fact that males of all species in the Leptanilloides genus-group have not been described and that males collected in Texas were unassociated with a colony, we believe there is sufficient evidence for describing L. chihuahuaensis as a new species. First, L. chihuahuaensis has a very disjunct distribution and occurs in a markedly different habitat than other species. Second, there are obvious morphological features that distinguish L. chihuahuaensis from other described males. And lastly, COI sequence divergence, as compared to several other species with data in GenBank, including L. gracilis, exceeds 8%. Although we do not think that this divergence level by itself is sufficient for species status - it has been shown that intraspecific divergence can be quite high (e.g. Meyer and Paulay 2005, Wiemers and Fiedler 2007) – we do believe that the result strengthens our argument. 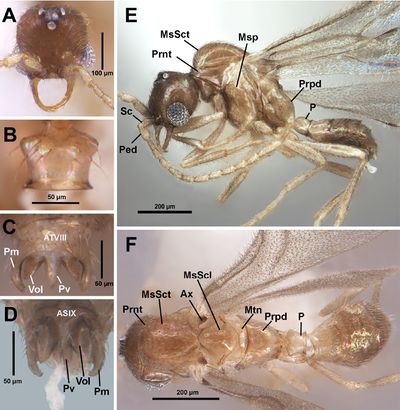 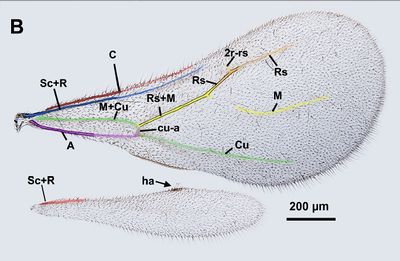 Wings with reduced venation; clear; fringed with short to longer fine setae; with numerous short, fine microsetae evenly distributed across wing surfaces and with scattered longer setae present. Fore wing: Costal (C) vein present, about 1/2 the length of wing, tubular basally for less than 1/4 the length of wing, then becoming nebulous before fading out completely. Pterostigma not present. Subcostal and radial veins fused forming Sc+R; located just below and parallel to costal vein, approximately the same length as costal vein and similarly tubular for about 1/2 of its length before becoming nebulous. Medial (M) and cubital (Cu) veins fused (M+Cu), nebulous, slightly less than 1/4 of the wing length. Anal (A) vein present beneath M+Cu, about the same length as M+Cu, tubular for slightly more than half of its length before becoming nebulous; apically M+Cu connected to A by nebulous crossvein cu-a; subbasal cell present between M+Cu and A. Branching upward from the top of Cu-a is the tubular abscissa Rs+M (the joined veins M·f1 and Rs+M). Radial sector (Rs), tubular, branches upward from Rs+M, then becomes nebulous just past the nebulous/spectral crossvein 2r-rs (1r-rs is absent). M branches off of Rs+M just before Rs, appearing spectral basally then continuing as a nebulous vein that does not reach the wing margin. Cu is present as a nebulous vein that branches off near the apex of A; Cu does not reach the wing margin. Posterior margin of fore wing with narrow, conspicuous fold where hamuli attach.

Hind wing with Sc+R present, tubular basally before becoming nebulous, less than ¼ the length of wing. No other veins present. Anterior margin of hind wing past midlength with a thin, but conspicuous dark stigma. Three hamuli present in the region of the stigma. Jugal lobe absent.

Named for the Chihuahuan Desert region where specimens were collected.