Colonies have been found under stones, but little is known about the biology of Lasius californicus.

A seeming preference for mid-mountain locations, specimens have been collected in oak-pine-juniper woodland, montane chapparal and oak woodland.

Alate dates. Extreme dates for alates are June 27 and August 10. Dealate queens were collected on July 18 and August 8. Flights may typically begin in late June and extend into August. (Wing 1968) 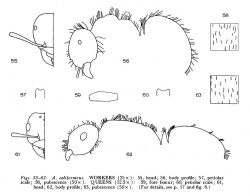 Wing (1968) - Bears a resemblance to both interjectus and claviger; closely related to colei, but with SI 81-84. Petiolar scale with crest emarginate, usually distinctly so; sides straight and parallel or slightly converging dorsally. Standing body hairs simple to finely barbulate. Gula and clypeus each with 10 or more standing hairs. A few standing hairs on alitrunk flexed. Dorsum of gaster with standing hairs fairly numerous to numerous, irregularly distributed. Pubescence on scapes appressed to decumbent.

Body color ranging from brown, with appendages lighter, to yellow throughout; feebly shining to highly glabrous.

Wing (1968) - Crest of petiolar scale moderately sharp to moderately blunt, feebly emarginate to straight; sides more or less straight and parallel. Length of longer hairs on crest and sides of scale and on clypeus less than 0.15 mm, those at posterior tip of gaster less than 0.25 mm. Standing hairs simple to finely barbulate, sparse; gula with 2 standing hairs located centrally. Pubescence on head moderate, on dorsum of gaster dilute.

Location of types: The single female collected by F. Grinnell, August 10, 1909 is hereby designated as the lectotype. Of the original series of 11 cotypes, 4 workers remain. All of these specimens are in the Museum of Comparative Zoology.