This worker key is based on: Longino, J.T. 2007. A taxonomic review of the genus Azteca in Costa Rica and a global revision of the aurita group. Zootaxa. 1491:1-63.

The workers of Azteca nanogyna and Azteca quadraticeps are unknown.

Identifying Azteca species from the morphological traits of individual workers is difficult. Colonies show strong size variation among workers (Wheeler 1986), and the size of the largest workers increases as colonies mature. The larger a worker is, the more queen-like it is and the more differentiable from other species. The following key is most likely to work when a series from a mature colony is available, so that the largest workers can be selected for examination. When size ranges are given in the key, they refer to these larger workers.

Queens of Azteca generally exhibit more pronounced morphological differences and are often much more useful than workers for species identification. Details of the nests collections are made from, e.g., location, structure, etc. can also be useful. There is a Key to Costa Rica Azteca queens. Nesting details can be found on many of the species pages linked to from this key. 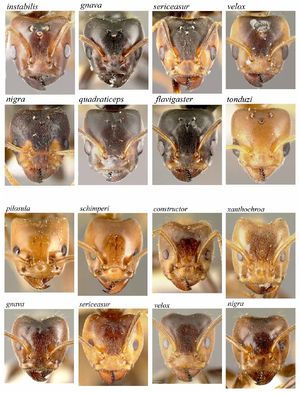 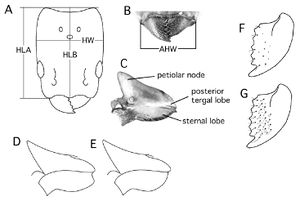