Heteroponera monticola comes from a high, wet region near the upper limit of forest ant occurrence, where ants of whatever kind are scarce and very hard to find (Kempf and Brown 1970).

General habitus of an Acanthoponera, but with reduced number of palpal segments (3,3), simple tarsal claws and obsolescent antennal scrobes, which characters place it into genus Heteroponera.

In Kempf's key (1962: 31-32) the present species runs to couplet 2. On account of its piceous color and relatively weakly sculptured terga I and II of gaster, monticola agrees more with the first alternative, Heteroponera carinifrons from Chile, but is really strikingly different from the latter species in general habitus, much larger size, protruding and marginate occipital lobes, strong propodeal teeth, strong reclinate spine on petiolar apex, heavily reticulate-foveolate dorsum and sides of head.

On account of the lobate occipital corners and well developed propodeal spines, monlicola is closest to the nearly sympatric Heteroponera inca (the only other species having these characters), from which it disagrees in the following features: Body color black, much larger size, shorter and parallel frontal carinae, shorter and less distinct antennal scrobe, longer funicular segments II-VII (longer than thick), more superficial and less distinct reticulate-rugose macrosculpture on thorax and gaster, strong petiolar spine like that of Acanthoponera, and longer propodeal teeth. 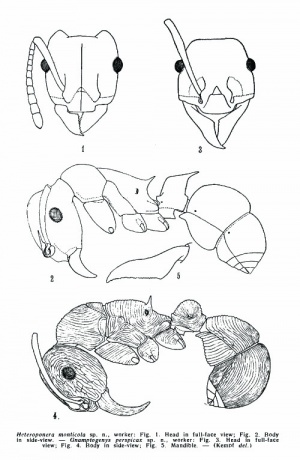 Head as shown in figure 1 and 2. Mandibles triangular, smooth and shining, with sparse piligerous punctulae, baso-laterally inconspicuously rugulose-punctate; chewing border with approximately 8 small teeth, apical and subapical teeth stronger: basal angle rectangular; a shallow curved groove parallels the basal border. Clypeus convex in the middle, with a strong sagittal carina prolonged more faintly caudad over the dorsum of head, fading on occiput; anterior clypeal apron narrow, its border gently convex, its lateral corners bluntly rectangular. Frontal area smooth, distinctly impressed. Frontal carinae forming convex lobes in front, covering the antennal sockets from above, then running parallel caudad and fading out at level of middle of eyes. Antennal scrobes weakly defined, terminating indefinitely in front and above eyes. Eyes strongly convex, each with a circummarginal sulcus; facet count across greatest diameter about 14. Occipital corners lobate, projecting both in dorsal and lateral view, sharply marginate infra-laterally. Antennal scapes finely reticulate-punctate, incrassate toward apices, which reach or even slightly surpass the occipital margin when laid straight back or nearly so from their insertions. Funiculi gradually thickened toward their apices; segments I and XI nearly twice as long as thick, the remaining segments slightly to distinctly longer than thick. Dorsum and sides of head reticulate-rugose and foveate; the foveae larger, with the intervening meshes of rugae less distinct, on dorsum, smaller, and rugae more distinct, on sides. Gular face impressed; finely but indistinctly reticulate-punctate or rugulose. Microsculpture of head capsule consisting of fine more or less distinct punctulae. Palpal formula 3,3.

Petiolar node as long as broad, its apex drawn out posteriorly in a long spine extending caudad and sloping slightly dorsad. Subpetiolar process in the form of a sagittal flange, the anterior corner of which is rectangular, the posterior subacute. Segment I of gaster (postpetiole) vaulted, hemispherical, slightly constricted just in front of posterior margin. Segment II narrower, with the stigma protruding from a small tumulus on each side of tergum. Sculpture of petiole and segments I and II of gaster the same as on thorax. Petiole with only anterior face finely punctulate; posterior face, beneath spine, practically smooth and shining. Tergum I with sparse, shallow foveae, the punctulae quite superficial except on posterior margin where rugulae become more distinct.

Variation. - No specimens were found in any of the three nests that showed outward signs of being a queen, ergatoid or otherwise. We assume that in this species, as in most Rhytidoponera and some other ectatommines, there is no obvious morphological differentiation of worker and queen castes, but that certain individual workers are fertilized and act as reproductives. The two nest series studied under the lens differ from each other in size and color. The first series, including the holotype, averages larger: head length 1.59-1.73 mm; head width 1.35-1.48 mm; truncus length 2.00-2.13 mm; hind femur length 1.59-1.68 mm; whereas the second series (C-21) has head length 1.40-1.46 mm; head width 1.21-1.30 mm; truncus length 1.64-1.81 mm; hind femur length 1.35-1.41 mm. This last series has the mandibles, antennae and legs a somewhat brighter ferruginous, contrasting with the black body. Immature workers of both series are dark reddish brown. Some individuals have the propodeal teeth very slightly recurved at their apices, while others have straight teeth. The petiolar spine also varies in that some examples have the apex straight, while others have it bent very slightly downwards. Sculptural and other variation is very slight.