One of a number of Cephalotes fossil species that are known from Dominican Amber.

A member of the coffeae clade differing from its sister species, Cephalotes integerrimus, by the denser foveae and by the CI < 114.0. (de Andrade and Baroni Urbani 1999)

Gaster suboval and with a pair of anterolateral lamellae

Pilosity. Each fovea with an appressed canaliculate hair; similar hairs but not originating from foveae and thinner on the gaster and on the legs. Posterior borders of the distal gastral segments with rare clubbed hairs. Second gastral tergite with a pair of long, thin, pointed hairs. 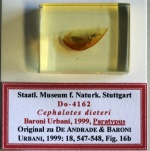 Holotype and paratype workers in the Dominican amber sample Do-618 and Do-4162, both in the Staatliches Museum fur Naturkunde Stuttgart.

This species is named after Dr. Dieter Schlee who built up the Stuttgart amber collection which represents the most important source of fossil material for this study.