This is a species of seed harvesters (individual and group forager) with small nest populations (few hundreds?). They are very docile ants. They nest in sandy areas, or even gravel soils, with a small mound surrounding the nest entrance. Flights occur in June and July. During the mating flights, sexuals search for the highest object in an area, which in its typical habitat is usually the myrmecologist! It can be a very interesting experience, and additionally the females can deliver a painful sting. (Mackay and Mackay 2002)

Cole (1968) - In the eastern part of its range, Pogonomyrmex desertorum is pale ferrugineous red; the pronotal rugae are delicate and comparatively sparse so that the highly shining surface is well revealed; and the posterior corners of the head are strongly shining and free of sculpture. This combination of characters defines the "typical" desertorum as it occurs in western Texas and in comparable areas of Mexico. With westward progression there is a gradual intensification and some addition of pronotal rugae, so that smaller areas of the shining body surface are exposed. Coincident with this transition is a deepening of body color and a reduction in extent of the smooth and shining corners of the head. In the extreme western portion of the range of destertorum, the pronotal rugae are more numerous and coarser; and the cephalic rugae have encroached for such a considerable distance into the posterior corners of the head that some workers of a nest series may have these parts almost completely covered with very fine rugae which are sufficiently dense to obscure almost entirely the shining surface. These features, together with a rather deep ferrugineous red hue, prevail in collections from stations near Gila Bend, Arizona, and Needles, California.

Chihuahuan Desert in rocky or sandy soils, including dunes. (Mackay and Mackay 2002)

The ants nest in sand or very sandy soil in open areas and construct circular craters of the same material. The workers move slowly, forage on trails at a steady gait, and frequently have the gaster turned downward as though they were laying a chemical trail. When disturbed at the nest they retreat and crawl beneath covering material if available. They are extremely docile; I have never been able to elicit an attack response. In fact, desertorum is probably the most inoffensive species of all North American members of its subgenus. (Cole 1968)

Base of antennal scape as illustrated in Pl. IV, Fig. 16; curvature of shaft rather strong, even, confined mostly to basal half; shaft rather strongly constricted and somewhat flattened along strongest part of bend. Basal enlargement considerably reduced (as compared with that of barbatus), trumpet-shaped; superior declivity long, somewhat concave, not steep; apex of superior lobe acute; superior and inferior lobes subequal in size. Lip moderately thick, curved distad, not so massive as that of barbatus or apache, not bipartite. Longitudinal peripheral carina weak or absent. Point faint or absent. Basal flange straight, thin, continuing to apex of superior lobe. Basal impression moderately developed.

Color varying from a rather uniform, light to dark, ferrugineous red. 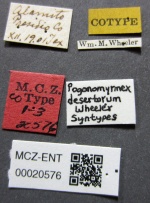