The majors of this species are large, with a head length (excluding mandibles) at least 2 mm in length, usually more. The pronotum of the major is covered with transverse striae, the posterior half of the head is without sculpture. (Mackay and Mackay 2002)

The nests of this species are in the soil, with a small mound (7 - 13 cms diameter). The nest entrance is large (1.2 cms), suggesting they are preyed upon by army ants (Neivamyrmex). Colonies are small and contain only a few workers. (Mackay and Mackay 2002)

Major: anterior third of head completely carinulate, with some carinulae that originate on the frontal lobes almost reaching the occiput; pronotum and mesonotal convexity completely covered by transverse carinulae; in dorsal-oblique view, promesonotal profile evenly trilobous; a small metanotal convexity present; the propodeal spines large and perpendicular to the basal propodeal face; postpetiole seen from above very broad and conulate. 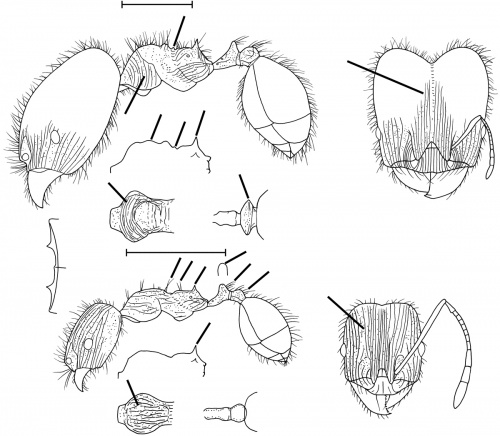