Three colonies were found in a vacant lot in Tucson by Stefan Cover (unpublished field notes), nesting in clayey soil; two had cryptic entrances, and one had a rudimentary crescentic crater of excavated soil. Wheeler’s type series were taken from nests in open sandy soil, the entrances of which were also marked by incomplete craters. The species harvests seeds. (Wilson 2003)

According to Wheeler the Tucson colonies were nesting in sand. Those taken by the senior author were nesting in coarse, gravelly soil. The majors of spadonia appear to confine themselves to the nest. The minors forage singly. We were unable to determine what this species eats, but it may be said that at least there was no evidence of harvesting activity. All three of these colonies were small, containing three or four majors and not more than a couple of dozen minors. (Creighton and Gregg 1955)

Major: anterior half of head densely carinulate, with a few carinulae traveling along the dorsal midline all the way to the occiput, and the entire remainder of the body smooth and shiny; propodeal spines well-developed and vertical to the basal propodeal face; the petiolar node seen from the side tapering to a point; the postpetiole seen from above very broad, and spinose.

Minor: propodeal spines well-developed and vertical to basal propodeal face; almost all of the head and mesosoma smooth and shiny.

Minor: concolorous yellow, with a slight reddish tinge on the head. 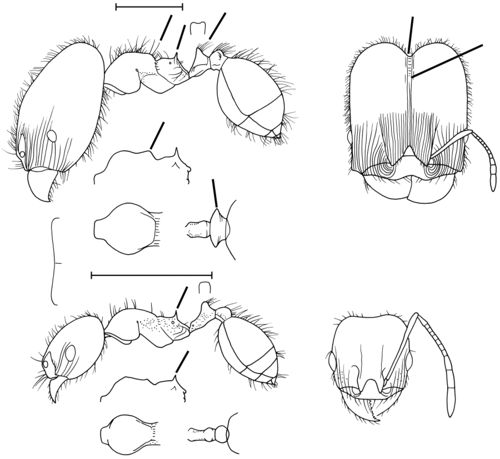