This species inhabits well-developed forests in lowlands. It nests in rotting twigs and wood blocks on the forest floor, and stores up a number of tiny seeds in its nest (Eg99-BOR-111). I have never encountered colonies which included more than one dealate queen. This species is sympatric with Pheidole quadrensis in Deramakot, Gunong Rara, Poring and Sepilok, Sabah, and Belalong and Merimbun, Brunei; and also sympatric with Pheidole spinicornis in Sepilok. (Eguchi 2001)

Eguchi (2001) - P. quadricuspis is most closely related to Pheidole lokitae, Pheidole quadrensis, Pheidole sperata, Pheidole acantha and Pheidole spinicornis, and several undescribed species (see under P. lokitae), but can be distinguished form the Bornean relatives by the characters given in the key.

Eguchi (2001) - Two completely allopatric forms that differ in length and density of hairs on alitrunk of the major are recognised in the material examined. The minors of these two forms have no conspicuous standing hairs on alitrunk, and cannot be separated from each other. All majors from Borneo cited above uniformly bear a few very short standing hairs, while those from the southern Malay Peninsula and W. Sumatra bear longer standing hairs more densely (unfortunately my previous examination of the type material (Sumatra) did not focus on this character of the major). Further examinations of additional specimens from various localities (especially within Sumatra) and reexamination of the major in the type material are required in order to conclude their status (I tentatively treat them as conspecific). Moreover, minors which are similar to those of P. quadricuspis except in its hairy body have been collected from Kutai N. P., E. Kalimantan (4 minors, SKY, 1993) and Maninjau, W. Sumatra (5 minors, SNS). However, I omit them from the enumeration of specimens, because I have never examined majors coupled with the hairy minors and this did not allow me to conclude their status. 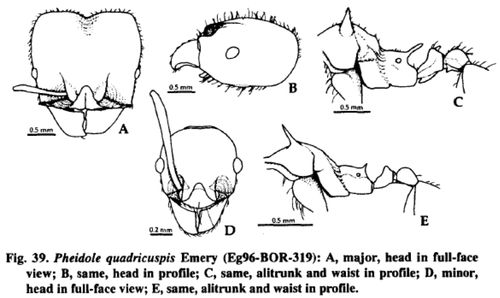 Eguchi (2001) - Major (n=10): TL 4.1-5.1 mm, HL 1.83-2.07 mm, HW 1.90-2.28 mm, SL 0.99-1.08 mm, FL 1.32-1.47 mm, CI 103-110, SI 47-53, FI 71-64. Head broadest at about 2/3 distance of head (as measured from the mid-point of a transverse line spanning the anteriormost and posteriormost projecting points, respectively); posterior margin of head in full-face view almost flat, but slightly emarginate medially (Fig. 39A); head in profile not impressed on vertex (Fig. 39B). Hypostoma with a pair of stout median processes. Clypeus with a median longitudinal carina, with anterior margin in full-face view emarginate medially. Eye situated at about 1/3 distance of head; , distance between mandibular insertion and anterior margin of eye 1.7-2.0 times as long as maximal diameter of eye. Frontal carina inconspicuous, extending backward to about midlength of head. Antennal scrobe present only around antennal insertion. Antenna with 3-segmented club; scape extending backward to about 2/3-3/4 distance of head; terminal segment 0.9-1.0 times as long as preceding two segments together. Masticatory margin of mandible with apical and preapical teeth, and a denticle in front of basal angle. Promesonotal dome with a pair of spines, with a low or inconspicuous prominence on its posterior declivity (Fig. 39C); the prominence in anterior view not or very weakly concave medially. Mesopleuron with a transverse impression. Propodeal spine digitiform, with narrow base, weakly down-curved, 5-6 times as long as diameter of propodeal spiracle (Fig. 39C). Petiole cuneiform, 1.3-1.4 times as long as postpetiole (excluding helcium); petiolar node in posterior view emarginate at apex; subpetiolar process low; its anteroventral corner bluntly produced forward. Postpetiole 1.5-1.8 times as broad as petiolar node.