P. godmani was found near streams in mountain forest at 460 m. One colony was discovered nesting beneath dead leaves, a second in soil under a log. (Wilson 2003)

Known from St. Vincent. This species, with its nearest known relatives in South America, may be an endemic of the island. If so, it is a threatened species; H. H. Smith, whose collecting on St. Vincent in the 1890s was notably thorough, found it only three times. (Wilson 2003)

DIAGNOSIS From Wilson (2003): A member of the tristis group, similar to Pheidole balzani, Pheidole gaigei and Pheidole huilana, and to lesser degree the species listed with them, distinguished as follows.

Minor: all of posterior dorsum of head and of entire dorsum of promesonotum transversely carinulate; semicircular carinulae fill the space between the antennal fossa and the eye.

COLOR Major: head and body light reddish yellow, except for postpetiole and gaster, which are medium reddish yellow with a brownish tinge. 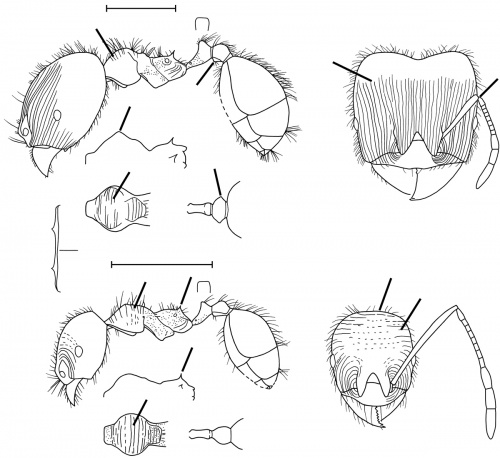 Named after F. D. Godman, organizer of the British Association and Royal Society survey of the biota of the Antilles. (Wilson 2003)