In Colorado, Gregg (1963) found cockerelli nesting at 1700–1900 m, under rocks in the clayey soil of short-grass prairie. Creighton (1950a) lists it as a desert ant in Arizona and New Mexico. Stefan Cover (personal communication) found it in the Chiricahua, Huachuca, and Santa Maria Mts. of Arizona at 1460–1740 m nesting in open soil and grass clumps variously in desert grassland, grazed grasslands with scattered oak, and juniper-oak creek-valley woodland. In western Texas, O. F. Francke encountered cockerelli in a nest in the open soil of mesquite-creosote-cactus scrubland (Mus. Comp. Zool. Harvard series). Winged reproductives were present in Arizona nests from late June to mid-July. (Wilson 2003)

From Wilson (2003): A member of the fallax group distinguished by the following combination of traits.

Major: light reddish brown; a rugoreticulum extends from around the anterior and posterior margins of each eye mesad to the circular carinulae of the antennal fossa; longitudinal carinulae densely covering the frontal lobes extend posteriorly to the occipital border; anterior half of pronotal dorsum and posterior half of the mesonotum transversely carinulate; all of the head, mesosoma, and waist foveolate and opaque to subopaque except the dorsum of the petiole, which, with the gaster, is smooth and shiny.

Minor: all of the head and mesosoma foveolate and opaque; dorsum of the waist and all of the gaster smooth and shiny; occiput narrowed, with a thin collar.

COLOR Major: concolorous light reddish brown, except rear half of gaster, which is a contrasting medium brown. 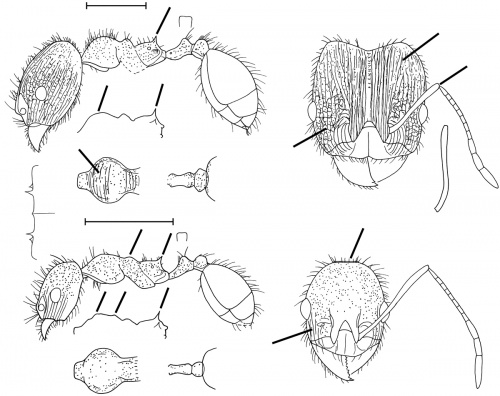 Named after the American entomologist and co-collector of the type series T. D. A. Cockerell. (Wilson 2003)