Naves (1985) found carrolli only in the shaded, sandy soil of tall oak or pine woodland. Subsequent collection by Stefan Cover and Lloyd Davis Jr. have securely identified carrolli as an early successional species that occurs in open, often disturbed habitats with sandy soil. Colonies are vigorous and consist of several hundred ants, including several dozen soldiers. Naves’ collections may represent moribund colonies in poor nest sites, or colonies about to be eliminated by shading of formerly open habitats. The colonies are small, with only one or two majors present. According to Naves, no more than 15 minors forage at a time, and then singly and mostly at dusk and in the morning, for distances not exceeding 5 meters from the nest entrance. The entrance is difficult to spot and leads to exceptionally deep vertical galleries, in one case extending 1.7 m from the surface. A seedfilled granary chamber approximately 4 X 2 X 2 cm in size is present usually at a depth of 30 cm. The minor workers are exceptionally sluggish, and show the unusual, perhaps unique habit for Pheidole of feigning death when disturbed, often curling themselves around particles of soil in a way that makes them even more difficult to see. (Wilson 2003)

From Wilson (2003): DIAGNOSIS A member of the “pilifera complex” of the larger pilifera group; for a characterization of the complex, see under Pheidole pilifera.

Very close to pilifera itself (q.v.), and differing as follows. The only consistent distinction is the orange color of carrolli versus the browns, yellowish browns, and reddish browns of the highly variable, more northern distributed pilifera In addition the major of carrolli has occiput and dorsal surface of postpetiole completely smooth, but this trait also occurs in some pilifera series. 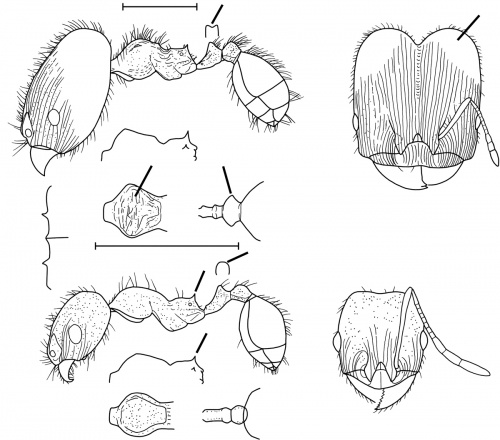 This species is named after Dr. John F. Carroll, my friend and colleague during several years of graduate study at the University of Florida