Nothing is known about the biology of androsana.

Allied to Ph. guilelmi-muelleri Forel. Head large, longer than broad, sides parallel, posterior corners rounded, separated by a deep occipital notch, which is continued forward as a deep frontal groove. Mandibles convex, with two very blunt apical teeth. Clypeus very short and flat, with a prominent median carina and slightly excised anterior border. Behind the frontal area, which is triangular, as long as broad, and fused with the clypeus, there is a rather deep elliptical pit. Antenna short, their scapes bent at the base and dilated towards their tips, which reach only a short distance behind the eyes. Eyes convex, situated between the anterior and middle third of the head. Frontal carinae large, flattened, continued back obliquely on either side as a ridge, which borders a shallow groove for the reception of the antennal scape. This ridge and groove end rather abruptly a little behind the middle of the head, and a little more than half way from the frontal groove to the lateral surface of the head. Pronotum with large rounded tubercles on the sides, without a distinct transverse depression and fold in front of the short and concave mesonotum. Epinotum with a longitudinal groove, its basal surface straight in profile, distinctly longer than the slightly concave declivity. Epinotal spines directed upwards, very short, not longer than broad at the base, hardly a third as long as the basal surface of the epinotum, and twice as far apart at their bases as they are long. Petiole from above nearly twice as long as broad, broadest through its posterior third; in profile the anterior slope of the medially excised node is long and slightly concave, the posterior slope shorter and convex. Postpetiole not quite three times as broad as the petiole, produced in the middle on either side to form a rather acute conule, which is directed slightly backward. Legs rather long.

Mandibles smooth and shining, their discs with a few small punctures, and towards the edges of the blades with deeper parallel linear depressions. Clypeus in the middle smooth and shining, on the sides with coarse ruga. Anterior four fifths of head with coarse longitudinal rugae, which on the posterior fifth pass over into transverse ruga of the same kind, so that the whole head is sculptured, but nevertheless somewhat shining. There is a faint tendency to anastomosis among the rugae. Thorax somewhat shining like the head, tubercles glabrous; prothorax crossed transversely by coarse ruga like those on the head; basal surface of epinotum rugose-punctate; declivity smooth but opaque; pleurae with longitudinal and rather dense rugae. Petiole and postpetiole nearly opaque, irregularly rugose-punctate. Gaster shining, the basal segment finely reticulate.

Hairs yellow, rather short and sparse, suberect on the antennal scapes and legs as well as on the upper surface of the body.

Head somewhat longer than broad, sides subparallel, posterior corners rounded. Eyes near the middle of the lateral surfaces. Mandibles, 6-7-toothed. Clypeus short, with very broadly rounded, entire and depressed anterior border, convex behind in front of the triangular frontal area, and with a faint longitudinal carina. Antennae I like those of the soldier, but straighter, and extending for about one third of their length beyond the posterior corners of the head. Thorax rather long and slender; promesonotal region evenly convex in profile, without lateral tubercles; epinotum and spines as in the soldier. Petiole fully three times as long as broad, hardly wider behind than in front, with subparallel sides; node not excised in the middle, in profile much lower and more rounded than in the soldier. Postpetiole campanulate, about as long as broad. Legs rather long and slender.

Mandibles, clypeus, and frontal area shining, the first with sparse, piligerous punctures. Head and thorax subopaque, the former reticulate, with a few irregular longitudinal rugae, especiallyon the front and cheeks; vertex rather smooth. Thorax with coarse, transverse rugae, becoming longitudinal on the pleura, especially in the region of the epinotum. Petiole, postpetiole, and gaster smooth and shining.

Hairs yellow, erect, abundant, and rather long, conspicuous on the legs and antennal scapes as well as on the upper surface of the body.

Major: postpetiole carinulate; very low mesonotal convexity; shallow antennal scrobe; cephalic dorsum covered by carinulae that tum mesad near the occiput toward the midline to align themselves with the transverse carinulae of the occiput.

Similar to Pheidole alayoi, Pheidole cubaensis, Pheidole macromischoides and Pheidole naylae of Cuba, and to a lesser extent Pheidole ursus of Mexico, differing in many details, as illustrated. 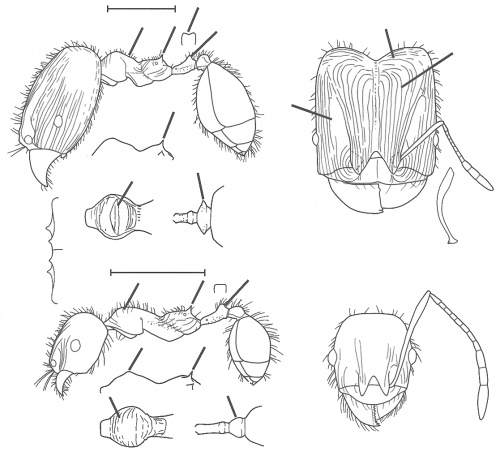 Described from one soldier and two workers taken on Fish Hawk Key at the west end of the Southern Bight, Andros Island.

Named after the type locality. (Wilson 2003)