Marcio Naves (1985) found P. adrianoi common within its range, nesting in sandy soil in clear areas within forests—a habitat also preferred by P. metallescens, which resembles it in the field to the naked eye. According to Stefan Cover (personal communication), adrianoi is typically associated with white-sand gaps in pine-oak forest. The nest entrance, surrounded by a crater of excavated soil, leads through a vertical tunnel 1–2 mm in diameter to a main chamber 30 to 40 cm beneath the surface. Mature colonies contain about 60 majors and more than 300 minors. Both castes engage in strictly diurnal foraging, and the majors participate in the retrieval of food. The main diet is seeds, although the workers also scavenge for small dead arthropods. The main flights of the winged sexual forms occur in July and August. (Wilson 2003)

Central and northern Florida, west to Okaloosa Co. in the Florida panhandle. (Wilson 2003)

From Wilson (2003): DIAGNOSIS A small brown member of the pilifera group distinguished by the following combination of traits.

Minor: profile of promesonotal dorsum smoothly convex; propodeal spines short and stout; mesopleuron and side of propodeum foveolate and opaque but lacking carinulae. Close to Pheidole davisi but differing in the above and other characters. 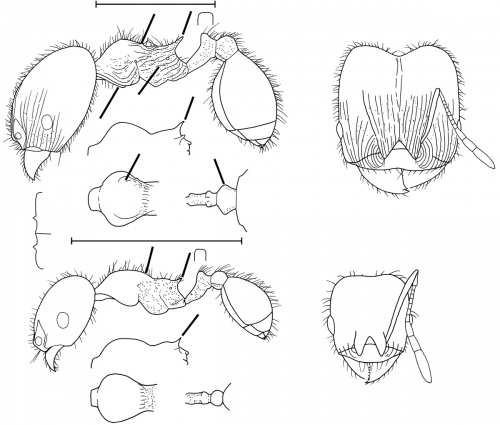