Two series were collected at the type locality in terra firme forest. One was a small group of ants found beneath the bark of a rotten log, the other several strays in soil (Stefan Cover, unpublished notes).

Known from the type locality in Peru and from several series collected at the Yasuni National Park, Ecuador. (Wilson 2003)

A small yellow member of the flavens group, similar to Pheidole infernalis, Pheidole peltastes, Pheidole sospes and Pheidole termitobia, distinguished by the following combination of traits.

Minor: Almost identical to that of Pheidole sospes (see illustration of that species). 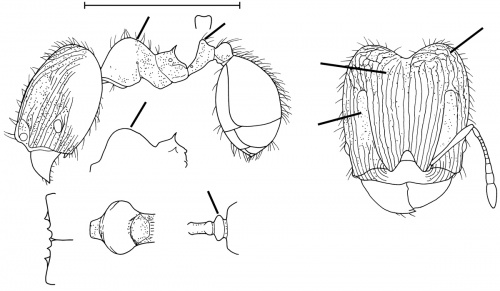